Welcome to the Byrdhouse

As you may recall, I recently acquired a Danelectro 12-string guitar... 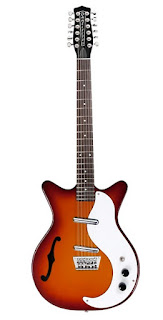 ...and in fact, just last Monday, I was in the studio with long-time garage band chums The Weasels and laid down a solo on a new song that I felt sounded quite splendidly McGuinn-esque.

Listening to the master at work on the above two tracks, however, was thus a pretty humbling experience. Let's face it -- nobody has ever done it quite as majestically as Roger and his Rickenbacker.

Have a great weekend, everybody!
Posted by steve simels at 8:54 AM

That Danelectro is a beauty.

Roger played the shit out of his 12 string Rick.
He says he really worked hard at it.

This speaks for itself.

Blue Ash Fan -- that Jangle Pop song is adorable. Thanks for the heads up.

I was at these shows. Crowded House did two nights at The Pantages with McGuinn as their opening act. Toward the end of McGuinn's set Crowded HOuse joined him as his backing band (aka ByrdHouse). This wasn't long after the Clark(e)-less Byrds reunited at the Coach House. Liked it so much we saw 'em again a coupla days later in Santa Barbara. I remember listening to the Replacements and Orbison's comeback on the way there and beaming a just-fucked-real-good glow. Good times. Neil Finn could get a bit annoying, nevertheless, musical quality and fun were on high level. Glad I went and even better that the powers that be issued this CD single.

i can't see the sound clips, anybody know why?

Steve, check out the whole Erik Voeks album that Jangle Pop is from. It's killer from start to finish. Just search for him on bandcamp.com and you can listen to the whole thing.

I can't see them either.