We Interrupt Our Dispatches From the Land of Ice and Snow...

...to bring you the following musical news.

So last Wednesday, the Shady Dame and I were having lunch at a restaurant at JFK prior to boarding the plane for Sweden. And seated near us were a bunch of youngsters (seemingly in their late 20s) with guitar cases, who we sized up immediately as a bunch of indie rockers heading off on tour somewheres.

On our way out, we couldn't resist going up to them and asking what the name of their band was, and the guy I took to be the lead singer answered "Steal shit, do drugs." 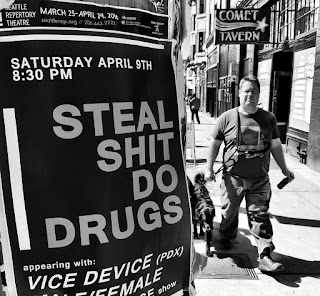 I made a face meant to signal my delight, but was clearly interpreted as something else, and the young lady in the band, to my regret sensing my extreme age, added "Don't be afraid, we're actually very nice."

Anyway, for your viewing and listening enjoyment, please behold Steal Shit Do Drugs. live on the radio in their Seattle hometown, with the haunting romantic ballad "Trash Man."

You can find more about these guys over at their Facebook page HERE.

And dig this tour schedule.

Frankly, when I was their age I wouldn't have had the stamina.

Swedish postings resume on Monday. Till then -- have a great weekend, everybody!
Posted by steve simels at 9:04 AM

Besides the obvious Swedish band, hope there comes a reference to Marching Band while you are there...safe travels!