From the fabulous Subtle as a Flying Mallet album in 1975, please enjoy Greatest Living Welshman Dave Edmunds -- superbly backed by Brinsley Schwarz -- and perhaps the coolest live cover of Chuck Berry's "Let It Rock" ever heard by sentient mammalian ears.

I bring that up because of this sad news: The great man himself is now officially retired. Via Brian Setzer: 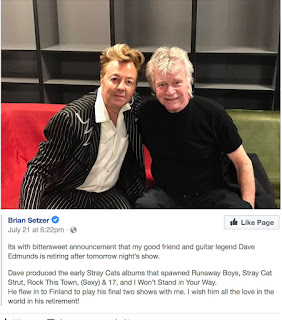 I interviewed Edmunds in 1975, when Mallet came out, and he was an absolutely lovely guy (as well as, obviously, one of the most gifted musicians of his generation; I don't think he ever made a bad record.) He will be missed, but hey -- at least he's alive and well and quit at the top of his game.

I should add that I happened to see Edmunds live (with Rockpile, which is the subject for another column) at the Bottom Line on the night in 1978 when Keith Richards got out of jail from his Canadian heroin bust. Imagine my delight when Edmunds brought Keith out to sit in with the band on the aforementioned "Let It Rock."

Imagine my disappointment when, as you can hear, the resulting performance turned out to be an unholy mess. Seriously -- every couple of years I pull that out to see if I'm mis-remembering how awful it was, and every time I do I'm disappointed all over again.

Fun trivia note: I was at an Edmunds show at Tramps in the early '90s, where I ran into Willie Nile, who said "Hey Simels -- when are you gonna get that Floor Models box set together?" I laughed, but nearly two decades later it suddenly struck me as a good idea. Which, in fact, it turned out to be.

Thanks for the memories, Dave!!!

Many jams that felt great were not improved when captured on tape.

You had to be there.

Oddly, I heard "Girls Talk" on the wireless this morning. Thought to myself that I need to learn that song on guitar. Now, it is a must.

That's good stuff Steve. Edmunds has a great voice also. Loved his cover of Seager's "Get Out of Denver" from the "Get It" album. And going all the way back to the 9th grade, "I Hear you Knockin'"

we can be thankful that he made it out of the 70's and into his 70's at least as so many didn't. after all the long hard years on the road he's earned the right to sit back, take it easy and watch a new generation grapple with the question 'exactly what is this thing called rock and roll?'

I had my first rockabilly overdose at a Dave Edmunds show.

1) Sorry to hear that DAVE EDMUNDS won't be releasing any more new records, but he thoroughly deserves a nice retirement.

2) Saw him in Toronto on a great bill in the winter of 1990. It was Edmunds, Graham Parker, Dion DiMucci of DION & THE BELMONTS fame and Kim Wilson, harmonica player and lead singer of the FABULOUS THUNDERBIRDS. The backing band included Terry Williams from ROCKPILE on drums, the Miami Horns, and Steve Cropper on guitar (I can't remember whether "Duck" Dunn was on bass). It was a really good show.

Got into Edmunds because he did a Bizet tune with wattage. KPPC played it and it floored me. I smiled when I heard the band's name was Love Sculpture. Had to special order the album just to get "Farandole." The rest wasn't so great, but it did have an incredibly raw, blistering and amphetamine-paced "You Can't Catch Me" that put the jets revving. There were a couple more rocked-up classical pieces of lesser quality. But the originals were lacking.

Edmunds' Get It and Trax On Wax 4 were favorites of mine at the time and are indelibly etched forever. Had the albums at home and the cassettes in the 124 Spider.

First time I saw Rockpile they were opening for Bad Company at the Forum. Good show. I went with this deep, insatiable guy who had a really cool van. He had a McQueen vibe if Steve were 6'4". After the show we made it in the parking lot while the traffic cleared. When the security kicked us out a few hours later, we went to Tiny Naylors and nourished, then boned in the car hop till daylight. That guy was incredible and was my regular Monday night. A great way to start the week. Even now, I sometimes catch myself moaning his name. He was a fuckin' fixer.

Dave would sometimes be Albert Lee's guest at a very small watering hole in Agoura Hills. They would play with the "competent" house band. The beauty of the tiny bar was that the lion's share of the customers didn't know who who either of them were. The anonymity pleased them and made for very loose shows with various drunken local yokels joining them for band karaoke. The place held about 50 people and they didn't give a shit what you smoked. Good times.

J. Lag: also saw that Rock And Roll Revue tour at the late, great Universal Amphitheater. Never have been much of a Kim Wilson fan, but he didn't bother me too much that night. His placement in the show helped. If I recall, Edmunds was up first, followed by Wilson, then Graham Parker, then Dion and a returning Dave Edmunds to close out, with others sometimes joining in. There were highs and lows.

That Richards-Edmunds "Let It Rock" seems to be getting better with age:-) This is your brain on Smack-Jack.

Saw Rockpile twice on a bill with Mink DeVille and Elvis Costello.

BBJ: Was at the Santa Monica Civic show with Rockpile, Deville and Costello. Went with Sandy and a couple of guys from Malibu Canyon. We met them at the beach the week before. We'd been staying at their place popping pills and getting some profound dickening since then. What the heck, finals were over and school was out.

Pre-show we went to Will Rogers beach and cut the edge off the amp by drinking a bunch of Jack Daniels while getting a titty tan. The four of us changed out of our swimsuits in the parking lot of the Civic. What little inhibitions we had were slayed by the Jack. We hadn't eaten all day so we smuggled in a bunch of yogurt and strawberries in Sandy's oversized beach purse.

Rockpile opened and Mink DeVille followed. They were both great. Costello's set was weird. The band's gear kept malfunctioning and he stormed off the stage before the set was supposed to be over. The audience wouldn't leave. 40 minutes wasn't enough. I guess he got over himself and came back on stage after a while to continue the show and satiate his fans. But after a couple more tunes with continued technical problems he again walked off. And this time it was for good. He was better a couple nights later.

A lot of cool stuff was happening around that time. Costello and Mink DeVille just had their second albums released. Street Hassle and Easter just came out too. And Petty's 2nd LP. I went to concerts galore around that time. Patti Smith played the Santa Monica Civic a couple of weeks before the Costello show. A coupla days after Patti, Tom Petty played UC Riverside. And a few days after Costello, Petty played the SMC.

Whoever sez the 70's sucked wasn't getting past the platform shoes, polyester clothes, happy face logos and other cheeze. But I dug Clackers. You can't beat going to the mountains at night, eating some shroooms, freeing yourself of your garments, electrifying your ladyland, and staring at the twinkling lights below. All this, while becoming one with your Clackers and connecting with the rhythm of the cosmos and the perfect harmony of orbital resonance :-) Just waiting for the warm honey sun to caress and bless our offerings.