Attentive and/or long term readers of this here blog may recognize the name Ronnie D'Addario for two reasons.

First, because out of the great goodness of his heart, he sang the angelic McCartney-esque background vocals on Letter From Liverpool, a song featuring a band with a bass player whose name rhymes with Sleeve Nimels.

And, secondly, because he's the proud dad of the hippest young band on the planet The Lemon Twigs.

But even coooler than that, Ronnie's also been producing exquisite Beatles-influenced pop/rock -- both as a one-man band (a la Emitt Rhodes, who is probably the figure he most closely brings to mind) or in various group contexts going back for decades.

And this evening, Ronnie -- backed by the aforementioned Lemon Twigs -- will be performing some of that stuff at my favorite NYC club. 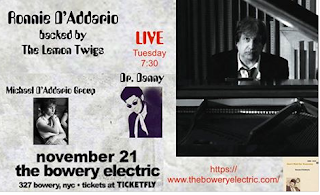 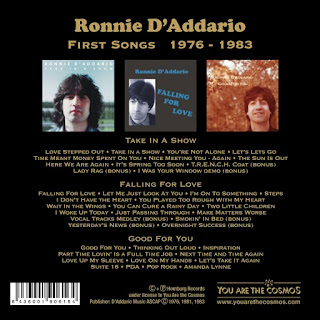 Here are two songs from the collection (the second is one of my favorite indie singles of the New Wave era) that should give you an idea of just how terrific he is.


You can -- and definitely should -- order First Songs over at Amazon HERE or at You Are the Cosmos HERE.

And, of course, if you're in the Big Apple tonight, hie thee over to Bowery Electric to hear Ronnie and family. It's just down the street from where CBGBs used to be.

And tell 'em PowerPop sent you.

You can listen to the show over at Area 24 Radio HERE>. We'll be taking requests and death threats -- I'll announce the e-mail address on the air.

It's a theme show -- I won't give it away till later -- and a splendid time is guaranteed for all.
Posted by steve simels at 7:45 AM

Had to skip out after the opening act, but on that subject…the Lemon Twigs went through the following songs (missing one or two):

And they closed with Rocks Off.

No more than fifty people in the building, seemingly all family and friends of the D’Addario clan.

I saw them a year ago when the brothers were trading off between guitar and drums, and they were terrific. Now, with Michael on vocals and both brothers on guitar (plus a new drummer and bass player, minus one keyboardist), they are beyond extraordinary.