Your Thursday Moment of I Can Now Die Happy

And why you ask? Because the Australian Broadcasting Company is going to air a two-part bio-pic about my heroes The Easybeats, and it looks like they've done it right. 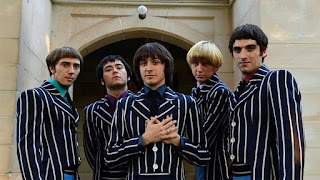 Directed by Matthew Saville (Seven Types Of Ambiguity, Please Like Me, The Slap) and written by Howzat and Paper Giants scribe Christopher Lee, the series is set in the 1960s and follows the story of the five musicians and young immigrants, who meet in a Sydney migrant hostel before taking up instrumental arms together and ultimately changing the face of Australian rock on an international level.

I'm not sure whether the band is lip-synching to the actual Easybeats song in that clip or not, but if the music is being provided by sound-alikes, they're dead on the money.

Also no word yet whether the thing will be broadcast on an American network, or if there will be a video release, but at the risk of gloating, I have a friend down under who's gonna record it for me. Nyah nyah nyah.

Damn I hope this is good and I hope we can view it here in the "States".

I wonder how the living Easybeats feel about the bio-pic?