The story so far: Marc Platt used to front one of my favorite lost bands of the 80s, L.A.'s The Real Impossibles (seen here...ohmigod...with Martha freaking Quinn)...

...whose music was a canny mix of power pop, garage and New Wave energy; I usually compare them to the Plimsouls and Peter Case, which I do not think is overblown at all. Bottom line: They were a killer band and they should have been household words.

Cut to 2018, and Marc is still making great music. To wit: His just released solo album... 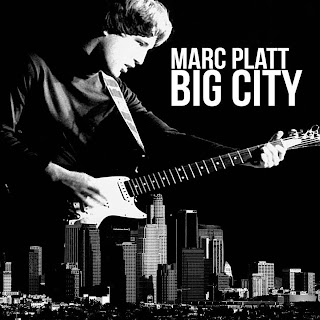 ...which is in more or less the same style as his previous work, although a little rawer and more garage... 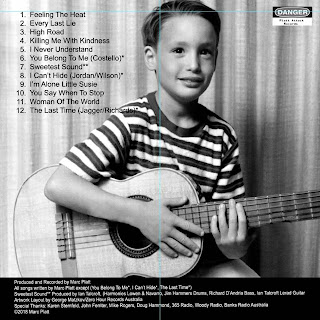 ...and in this case including three really fabulous covers -- a dark, menacing take on The Stones' "The Last Time," a spooky stomp through Elvis Costello's "You Belong to Me," and a straight-ahead version of The Flamin' Groovies' "I Can't Hide" that may rock harder the original.

Have I mentioned that Marc has thoughtfully included a bunch of his new songs that are instantly addictive?

To wit, the sort of folk-rockish "High Road"...

...and the moody jangle-fest "Feelin' the Heat."

Plus lots more, and the whole thing adds up to one of the best albums of the year so far. You can (and very definitely should) order it Amazon over HERE.

Martha says their EP was produced by Peter Case.....

Marc does a great job with Big City. His vocals are solid, the songs are strong and he manages to take the HIGH ROAD and brings you along with him. I like it!

Covering both "The Last Time" and "You Belong to Me" seems kind of redundant.

Great song. And I think I may need to take a cold shower after seeing Martha Quinn.