Annals of the Magazine Business (An Occasional Series): Special My Editor is a Putz Edition

So if you were here last Monday, you will recall that I was enthusing about the forthcoming deluxe reissue of Love Junk, the masterpiece debut album by The Pursuit of Happiness. And, as promised, therein lies a tale.

I didn't review Love Junk when it came out; I was then toiling at a video magazine, and probably would have missed the album entirely had not two of my colleagues -- Glenn Kenny, (now a film critic for the New York Times), and Doug Brod (who went on to be editor in chief of Spin) -- turned me on to it. In any event, by 1990, when the band's second album arrived, I was back running the pop section at Stereo Review, and I jumped at the chance to write about it. 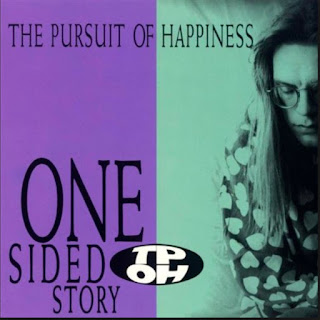 The last time they checked in, with their 1988 album Love Junk, the Pursuit of Happiness revealed themselves to be a splendid anomaly of a band, virtually the creators of their own genre: Wiseguy Pop/Metal with great tunes and honest lyrics about sex. Led by Moe Berg (whom I once referred to as the first important guy named Moe in rock history), they dispensed music that was at once witty and serious, tuneful and hard-edged, playful and almost profound, all in the context of an examination of the sorry state of relations between the sexes here in the declining days of the century Isaac Bashevis Singer called "on balance, a complete flop." Clearly, this was a significant bunch of musicians.

Well, here they are again at the dawn of the Nineties, and their latest record, One Sided Story, proves that their debut was by no means a fluke. The music is as tough and mature (in the best sense) as one could hope, and again Todd Rundgren's production fits the band like the proverbial you-know-what. Nevertheless, and at the risk of sounding churlish, I have to say that some of the fun has gone out of the enterprise. Serious as Love Junk may have been, it was also one of the best dance-around-the-house albums since the first Pretenders record, and One Sided Story is a far more somber affair. In fact, if there's a unifying emotional theme to Berg's new songs, it's a sort of rueful desperation. And while most of us will recognize the feeling, even identify on some level, the songs don't exactly make you want to do the boogaloo. The most wrenching emotionally is "Shave Your Legs," in which Berg sets you up for a sort of collegiate sexist joke and then shifts gears into an absolutely heartbreaking lover's plea to save a disintegrating relationship. It's an astonishing performance.

Of course, not everything is slash-your-wrists depressing. "Food," for example, has one of the funniest openings ever penned for a rock song, and the eminently hummable "Runs In the Family" notes that beauty is "as easy as DNA," an insight unlikely to occur to, say, Jon Bon Jovi. But even though the band's execution of Berg's tunes retains an admirably ferocious (but not overbearing) crunch-guitar attack, and even though Berg's singing is taking on an endearingly Lou Reedian cast, there's no getting around the fact that - perhaps deliberately - One Sided Story is something of a bummer. That's a relative judgment, of course - on an off day these kids make smarter music than 99 percent of the metal bands in the Western World. But what the album ultimately sounds like is the soundtrack for Moe Berg's evolution from undergraduate smartaleck into confident adult, which is to say that it's a little strained and a little awkward. That doesn't mean you shouldn't buy this record for your own personal collection. In fact, you should. It just means that growing up is a bitch and I for one wish Berg and Company all the luck in the world while they do it. -- S.S.

I worked very hard on the piece, which I was and still am quite proud of, and so you can imagine my surprise and delight when -- a few weeks after it hit the newstands -- I got a handwritten note from Moe Berg himself. The gist of it, which I am paraphrasing from memory, was that the band had gotten a lot of adulatory -- I think the word he used was "gushing" -- press, but that as far as he was concerned I was the one critic who had really gotten what the band was about.

I was quite insufferably pleased with myself over this, but I had barely time to pat myself on the back when I was summoned to the office of the magazine's editor in chief, and told to close the door. The following conversation ensued.

EDITOR (pointing to my TPOH review): What the hell were you thinking when you wrote this?

ME (stammering): I thought it was a perceptive, funny piece, and I just got a letter from the band's lead guy who thought so too.

EDITOR: You will never again waste that much space in the magazine on a review that isn't completely enthusiastic.


That's a true story. And if you're wondering why I didn't quit on the spot, so am I, even after all these years.
Posted by steve simels at 9:33 AM

I've always wondered if that sort of thing happened, especially when I see so much dreck getting four- and five-star reviews. (I'm looking at you, Rolling Stone.)

I bought "Love Junk" when it came out and I must admit to being rather underwhelmed. But, after reading this, I think I'm going to have to give it another shot.

I am informed I did in fact review LOVE JUNK; haven’t been able to find it online yet, however.

That's the problem with rock reviews today ... no one EVER mentions Isaac Bashevis Singer.

And with regard to your Stereo Review writings, I sort of recall that your pieces were longer and more thoughtful than the rest - sort of like feature reviews - and one of the reasons I subscribed to SR until its end was that I didn't need reviewers to tell me about the latest Fleetwood Mac (I could hear Mac on the radio), I needed reviewers to point to stuff NOT on the radio, although TPOH did get some airplay in NY via WLIR-FM in Nassau County and WHTG-FM in Eatontown, NJ, two stations I paid attention to.

From STEREO REVIEW February 1989 BEST OF THE MONTH

Given America's preoccupation with sex, it's ironic that our pop culture - specifically the movies and rock-and-roll - deals with the subject so superficially and dishonestly. Actually, rock-and-roll is particularly deficient in that regard, not very surprising when you consider how much of it is pitched at fourteen-year-old boys. Nonetheless, it's disappointing in a music that, at least theoretically, is supposed to have something to do with honesty and freedom.

That's one reason "Love Junk," the debut album by a group called the Pursuit of Happiness, is such a pleasant discovery: At last, here's a band that actually has the guts to confront sex with realism, maturity, and, occasionally, wicked humor. Of course, sex isn't the only thing on their minds (growing up, another subject all too rarely dealt with in rock, is the album's second major theme), but it's refreshing to hear it sung about by someone other than the usual heavy-metal morons - which these five musicians most emphatically are not, despite a crunch-guitar attack as hard as any you've ever heard.

The band's principal weapon in their attack is singer/songwriter Moe Berg, probably the first important Moe in rock history and a guy who seems to have a remarkable grip on the muddled state of relations between the sexes as the Eighties wind down. "I'm looking for someone with a voice that's true," he declares in Looking For Girls, "and I'm going to be nice to her - maybe she'll be nice too." A lovely sentiment, to be sure, and one I'm sure we can all relate to, but it's followed, significantly, by, "Then I'm going to do it to her four hundred and eighty-seven thousand times." Take that, Prince!

Elsewhere, Berg deals with unrequited love (Man's Best Friend), jealousy (Hard to Laugh), the joy of seeing the object of your desire in the altogether (Beautiful White), the destructive uses of sex as a substitute for communication (Down on Him), and even the difficulty of writing about relationships when you're past a certain age. "I don't write songs about girls anymore," Berg confesses on the hilariously self-revealing third track, I'm An Adult Now. "I have to write songs about women."

The gratifying thing about "Love Junk" is the way the music sounds like what it means. The tunes and the band's execution of them are every bit as smart, heartfelt, and funny as Berg's corrosively sane versifying. The idiom, for want of a better term, is pop metal, all ringing guitars, aggressive drums, and angelic harmonies. Here, in the hands of people who obviously have artistic aspirations beyond growing their hair just right, the genre finds something of an apotheosis. And the cream of the jest is that a number of these songs - the wistful She's So Young, for example - could easily be radio hits.

A beautifully written review, yes. But, I'm sorry, your review of "Life in the Foodchain" still sits at the pinnacle of your work. (Well, at least from what I've seen, and I've read a great deal of your work, having been an SR subscriber way back when.)

That FOODCHAIN review is my favorite too, pal.

You didn't quit that day for the same reason that anyone who has been in that position doesn't: if you work for someone else, you have to take their crap.
Let's raise a glass to retirement. (And to not being edited).

On the subject of editors or the lack thereof, last week's New Yorker, of all places, ran a piece that contained the phrase, "Like I said."

I love the Foodchain review too, but I’m also partial to your review of Emerson, Lake, and Palmer’s “In Concert”, for reasons that should be obvious, i.e., Lovecraft content.

I should add that the reason I bought "Foodchain" was the SR review. I definitely wasn't hearing that sort of thing on the radio in my little podunk town. Love that album to this day.

Heh. I just referenced that Foodchain review in a Facebook post today (one of those "10 Albums That Changed My Life" things that go around.)