The Family That Sings Together...

Brian, Carl and Dennis Wilson of The Beach Boys, in the studio, circa 1964. 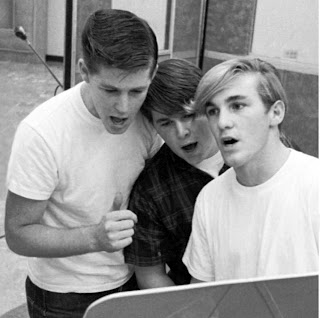 I have a theory -- and, to quote Monty Python, it is mine and I have it -- that if Dennis had been born 30 years later, he would have been the drummer of Foo Fighters. And if you think that's far-fetched, let me remind you that the actual Foo drummer, Taylor Hawkins, sings on a bonus track on the reissue of Wilson's 1977 solo album masterpiece Pacific Ocean Blue. 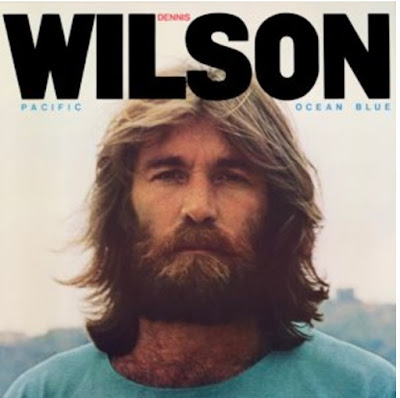 Here's Hawkins with the story, which is actually rather moving in its own right, via a piece in MOJO from 2015:

My ex-girlfriend's dad is [original Pacific Ocean Blue co-producer] Gregg Jakobson. About seven or eight years ago, Gregg was saying "You know, you should check out this album I worked on with Dennis Wilson." And I fell in love with it; I loved the honesty in it, the aching beauty of his songs and his voice...

Gregg mentioned that there was a bunch of unfinished tracks. With "Holy Man," Dennis had done a vocal and hated it, and made the the engineer erase it. What they had was a scat guide vocal that Carl [Wilson] had done with a rough melody. Gregg gave me a CD of the song and said "Do what you think you can with it."

I didn't listen to it for a while. I just felt really weird about it -- like, I can't fuck with this...But I tried to channel how Dennis would have done it.

Some people may say "What the fuck is the guy from the Foo Fighters doing on this record?" People hold Dennis very dear to their hearts. But there's a lineage; I'm a beach kid, a drummer, and I've been living with Dennis's music for a long time. I meant what I did genuinely."

Will Courtney's ode to Dennis:
https://willcourtneymusic.com/track/1023309/the-pain-song-for-dennis-wilson

Boo, you don't mess with old recordings. I know I guy with unreleased tapes of his power pop band CIRCA '73 that was all ready to re-issue and he decided he wants "modern" guitar sounds on it so adds them. Completely ruins the project. These discoveries of unissued material are so rare these days, there's no reason to do that.

Excuse me, no instrumentation was changed here. Just a stereo remix. Which they would have done back in the day except Brian was deaf in one ear.

I give Taylor and everyone involved with this project a pass.
His voice is a dead ringer for Dennis, and he's a drummer.
The world would not be better if the recording had been left alone.

I don't think this compares with CIRCA 73.
That is more like Frank Zappa re- recording new drums on old records, which did indeed ruin the sound.

And just for the record: Han shot first and nothing will ever change that....