Obviously, the Great Trump Song has Yet to Be Written (Or Unearthed)!

From 1974, please enjoy the Vic Caesar Orchestra and Chorus and their self-explanatory ode to an earlier era of evil -- "Nixon's the One." 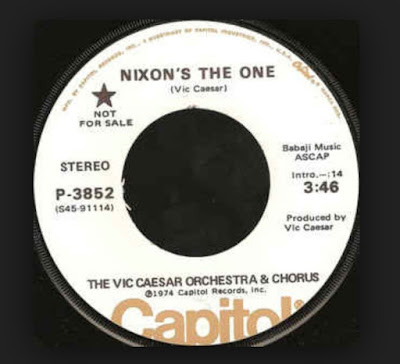 That was originally recorded and privately released in the run up to the Nixon/McGovern election in 1972; one presumes that bandleader and arranger Caesar was a Nixon enthusiast. Two years later, however, as Watergate heated up, Capitol Records -- to their eternal credit -- licensed it and released it as a novelty 45. I well remember the day it arrived at Stereo Review and I got to listen to it for the first time. I also used to play it for various of my commie/hippie friends, who to a person responded with slack-jawed disbelief.

I should add that it later resurfaced on the soundtrack CD to the 2006 Richard Gere film (about Clifford Irving) The Hoax . Where it remains commercially available to this day.
Posted by steve simels at 8:25 AM

The great Trump song was released several years ago by the late, great Jim Dickinson. It's called "Asshole".

If Nixon earned a 45 single then Trump should earn an opera then length of the "Rings" trilogy.