An Early Clue to the New Direction: Special It's the Smithereens Edition

From their 1980 DIY release "Girls About Town," please enjoy the greatest thing from Jersey whose name isn't Bruce, i.e. The Smithereens, and their splendid cover of the Beach Boys gem "Girl Don't Tell Me." 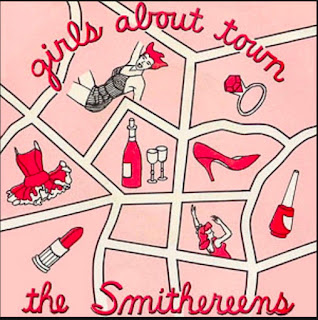 Incidentally, that's also from a just released CD that collects all the cover songs -- four previously unreleased -- the 'Reens have done over the years, usually tucked away on movie soundtracks or single B-sides. It's an absolutely killer album; you can -- and should -- order it over at Amazon HERE.

I should add that a coveted PowerPop No-Prize will be awarded to the first reader who gleans its relevance to the theme of tomorrow's Weekend Listomania.
Posted by steve simels at 12:03 PM

Interesting. According to Amazon, the "sponsored products related to this item" include "Reusable Adhesive Invisible Anti-bump Silicone Nipple Covers Pasties." Somehow, I don't think that's the same kind of "covers."

I should add that seeing the 'Reens doing that song live at Kennys around that tine was a life changing experience. I couldn't believe that a band was getting paid to do that in public.
:-)

Songs with "Girl" in the title?

Something related to Marshall Crenshaw??