Bach is Dead and Hardy Fox Isn't Feeling So Good Himself

According to the New York Times, Hardy Fox (one of the founding members of the San Francisco music and multi-media collective The Residents -- maybe) has died at age 73. 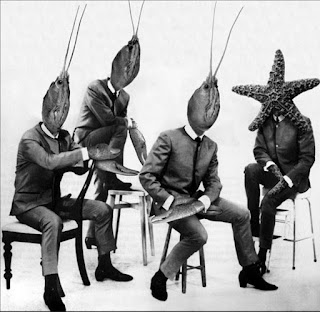 The above song is one of the most accessible tracks(!) from the Residents' 1977 EP Duck Stab, which is where I first took notice of them, and which apparently was their first brush with above-ground success, albeit on a limited scale. Apart from the music itself, one of the things I most loved about the record was it was one of those 7-inch vinyl artifacts that could have been pressed at either 33&1/3 or 45 rpm, and there was no indication anywhere in the packaging as to which speed was the correct one. In fact, it sounded good either way.

I should add that, thanks to the Times obit, I have just learned two fun facts about the band.

The first is the origin of their name. It was chosen after sending a demo tape, anonymously but with a return address, to Warner Bros. Records. The tape was rejected (quel surprise) and returned, addressed to “Residents.”

I was also flummoxed to discover that their 1986 version of Hank Williams’s “Kaw-Liga,” which sampled Michael Jackson’s “Billie Jean”...

...sold over 100,000 copies, which is pretty darned astounding for a bunch of avant-garde provocateurs on an indie label.

In any case, RIP Hardy Fox. Now resident of a better world, one hopes.

Discovered the Residents way back in the late '70s and LOVED them. This was about as weird as music could get and still be called "pop." Saw them live, even, back in 1986. Two players, all in anonymous white; two 'dancers' also all in white, striking poses; and their amazing mostly-full-time guest guitarist, Snakefinger.

Next time you're on the show remind me to tell you my Residents story. It has ramifications that potentially endangered our future generations here on earth!