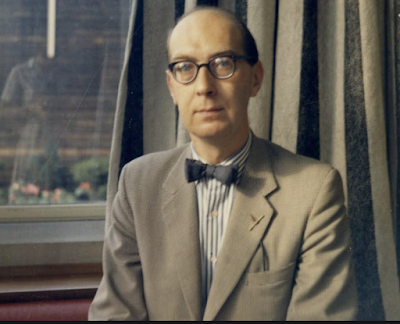 ...that's the most brilliant thing ever written about what used to be called the Generation Gap.

(which was rather late for me) -

Up to then there'd only been/A sort of bargaining,

A wrangle for the ring,

A shame that started at sixteen/And spread to everything.

Then all at once the quarrel sank/Everyone felt the same,

And every life became

A brilliant breaking of the bank/A quite unlosable game.

(Though just too late for me) -

The cream of the jest, of course, is that Edroso is quoting this to make fun of the odious Rich Lowry (a white power prick over at that other white power prick William F. Buckley's National Review) and his, shall we say, moronically specious argument that Joe Biden is the most left-wing Democratic president in the history of the good old USA. But hey -- we already know Conservatives don't know shit about shit, and especially pop culture.

In any case, let's just say that I intend to make Larkin a subject for future research.

Kimberley Rew has a song about him (Larkin, not Lowry). Even references that poem:

Post-Imperial pessimism. Not a fan.

I wouldn't call myself a conservative, but I've been reading Lowry for several years in the NY Post and I find him to be one of the least odious Republicans/conservatives. Unlike most of them, he does not hesitate to criticize Trump. Unfortunately for Democrats and liberals, he does not hesitate to criticize them either. Any specific columns or opinions you object to? Love this blog BTW.

Larkin as a person was not a particular nice person. He was a librarian for his whole working life. What he was though was a fantastic poet. Check out "Wires", "I Remember, I Remember" or most famously "This Be The Verse."