It's Self-Indulgence (A Few of My Favorite Things) Week: Part I -- Tempus Fugit, Baby!!!

Okay, kids, in case you haven't figured it out from the title here, I'm devoting this week's posts to stuff -- from a variety of genres -- that I just happen to love, and without apology. Hopefully, you'll get a kick out of them as well.

Exhibit A in that regard: From 1967, please enjoy The McCoys and their chilling and musically brilliant ode to the passing of time in this sad vale of tears "Beat the Clock."

The song was co-written by producer Richard Gottehrer, who later did the early Blondie albums, and I think I can safely say it's the best rock song ever about aging. I should add that I literally wore out the mono 45 single version... 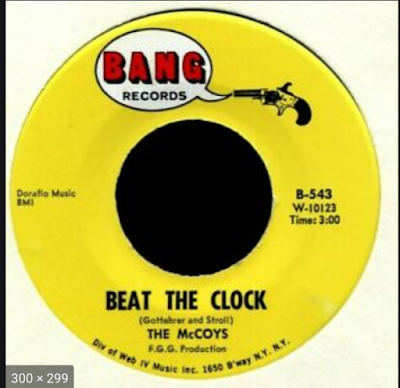 ...of this back in the day. I mean, it was unlistenable by the time I stopped trying to play the damn thing.

I should also add that when a stereo version of this finally appeared on a McCoy's best-of in the 90s, I felt that I could die happy.

I should also ALSO add that the then teenage Rick Derringer's faux Wes Montgomery guitar solo on it is magnificent.

Another fine addition to what Springsteen called (I paraphrase) The grand tradition of 24 year olds writing songs about being old.

Nice tune. Derringer's solo is reminiscent of the Thumb. Derringer is a helluva guitarist (as was Wes M)

If this is how we are starting the week on PowerPop it is going to be one amazing week. Thumbs up on today's choice. I remember you always thinking "Beat the Clock" was a killer track!

There were some amazing singles released in the mid to late sixties. For me it was the golden age of the rock & roll 45. The time before FM rock radio split off the rock & roll fans from the top 40.