And in Conclusion, Jefferson Beauregard "Jeff" Sessions III -- Bite Me!

Sorry to get all political this morning, but these people are absolutely beneath contempt.

Republican senators sound increasingly unlikely to try and block Elena Kagan's confirmation to the Supreme Court, but in the meantime they've focused some of their attention on an even more difficult target: former Justice Thurgood Marshall, a civil rights pioneer and the first African-American to sit on the high court. Marshall's name came up 35 times during the first day of Kagan's confirmation hearings.

There's "no doubt he was an activist judge," Sen. Orrin Hatch (R-Klingon) said of Marshall on MSNBC Monday. "Let's admire the man for the great things he did, but let's not walk over and wipe out the things that really didn't make sense as an obedient student of the practice of law." The Salt Lake Tribune tracked Hatch down after Monday's hearing to ask if he would have voted for Marshall, the man who successfully litigated Brown v. Board of Education not long before he joined the Supreme Court. "Well, it's hard to say," was Hatch's response.

Sen. Jeff Sessions of Alabama, the ranking Republican on the Judiciary Committee, likewise decried Marshall as "a well-known liberal activist judge" in his opening remarks during the hearing.

Well, actually no, it isn't. So by way of a heartfelt personal response, please enjoy brilliant power pop wiseacres Something Fierce and their 1990 tribute to the great man -- "Poetic Justice Thurgood." 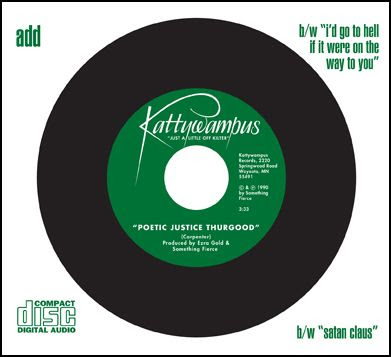 Re: Your response to Orrin Hatch:

To quote a great song "I Second that Emotion".

If it weren't such a great, great song, I'd dedicate Warren Zevon's "My Shit's Fucked Up" to Sessions & Hatch & all those other stoopid motherfuckers.

As I've done on other blogs, I'd like to take this opportunity to apologize for the people of Alabama. We're not all like the idiots we elect.

Oh, and fuck you too, Orrin.

Kagan will pass, of course. But it's a great opportunity for the GOP - which boasts exactly zero people of color in its ranks - to dog-whistle the ignorami that support it: hey, we still hate all the right people.

I note that the nasty little republic goobers are really taking Kagan to task (i.e. trashing her) exactly like they did Sotomayor.

However, at the Alito hearings, these same little men castigated the Dems for making Mrs. Alito cry.

I think Frank Zappa said politics was the entertainment arm of industry. If so, the pitchfork-wielding Republican hordes are the vast wasteland segment. There is no rung too low for (some of) them to stoop. But hey, what a great song! Love the chorus. And thanks for leading some of us (at least me) to Something Fierce. - AP