Great Lost Guitar Solos of the 70s (An Occasional Series)

From 1973 and the largely overlooked album Louisiana Rock & Roll, please enjoy Potliquor and "H." Their (I think tremendously haunting) ode to...I'm not exactly sure what.

I mean, given the title I have my suspicions, but I've never quite figured it out, despite repeated, even obsessive, listenings.

Anyway, the absolutely perfect not-a-superfluous-note guitar solo at the finale is by the song's author (and singer), Les Wallace. And it's as close to vintage Mick Taylor with The Rolling Stones as anything I've ever heard, I'll tell you that for free. 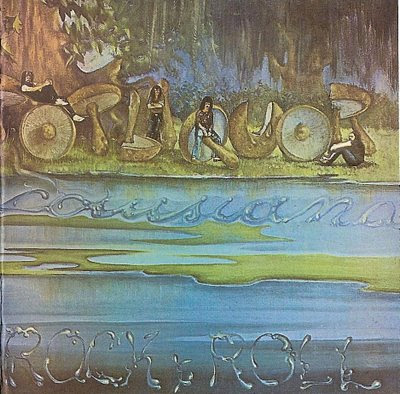 Amazing production on that, as well; I particularly like the way it's all but impossible to discern where the guitar ends and the clavinet begins. Seriously -- I can't think of another American hard rock band of the same vintage whose records sound as good as that.

Potliquor (I've been a fan since back in the day, thanks to being on a lot of record company mailing lists in college) were an interesting bunch, actually, and definitely worth reappraisal. Their three albums (released between 1969-73) were wildy uneven, but the good stuff was out of this world and there were times they got really close to the sort of mutant blues/metal soundscapes normally associated with Brits like The Move.

Exhibit A in that regard -- the title song from their second album, Levee Blues.

I've tried to track these guys down over the years. Don't know where the aforementioned Les Wallace is, but drummer Jerry Amoroso is on Facebook and has threatened to get in touch with me (hi, Jerry!). Auxiliary bassist and friend of the band Leon Medica (that's him on both of the posted clips) believes they're all alive and well, and has been in touch with keyboardist (turned Christian singer/songwriter) George Ratzlaff from time to time.

Incidentally, the aforementioned Leon Medica, who kindly phone chatted with me a couple of weeks ago and who's a heck of a nice guy, has had a remarkable career as a musician (a founding member of the still touring Louisiana's LeRoux) and producer since the Potliquor days; check out this list of credits. The part about working with Sir George Martin, especially.

In any case, you can legally download all three original Potliquor LPs over at Amazon here.

And if Les Wallace is out there -- dude, give me a holler. I really want to know what the song is about.
Posted by steve simels at 12:01 AM

You mentioned these guys to me last year, and I did indeed "legally" download both records. I echo your words.

Strong CSN&Y harmonies showing up, too.

What a surprise! I'd relegated this kind of FM heavitude to the schlocky bands they played on the radio in St. Louis. But these guys have it all: instrumental chops, good material, great production. Reunion tour?

Somehow this took me back to listening to the Marconi Experiment at WMMR in Philly back in the day.

I grew up in once upon a time in Rural Florida. I joined a mail order music co when I was in Jr High school. I ordered the Potliqour album Loiusiana Rock and Roll. It was a life changer. It made me pick up a guitar and learn to play it.

I wore that record out listening to the final cut "H". which by any standard is a masterpiece,the perfect storm of writing, recording & mastering. Like the writer of this blog I now wish to hear Les Wallace explanation/interpretation as to the meaning of the song. I am now 55 years old/ But the song (the entire album for that matter) is as fresh as ever. In many ways it's fresher than ever, analog at is best.

Les where are you. Please come in. We wish to hear from you. Because we are in search of a place to rest our Heads.

Les Wallace was in my place of employment yesterday!

I was raised in Baton Rouge, LA and saw Potliquor and their predecessor, The Basement Wall many, many times at local venues such as The Colonel's Club and The Lakeshore. Sadly, songwriter, singer and keyboardist George Ratzlaff died last Tuesday (3/8/2016) in Orlando, FL at the age of 68.