It Takes a (Little) Village

From a very interesting piece in the current issue of MOJO. The person being quoted is the great John Hiatt, about why Little Village -- the sort of roots-rock supergroup featuring himself, Nick Lowe, Ry Cooder and Jim Keltner -- didn't really happen as it should have.

"It came apart and I'm not sure how. Nick says he's not sure either...I was scared. I think we all were. We were thrust out there when we were just finding our legs. Some shows were magic, you could levitate, the whole place was vibrating...But some shows were...not good." 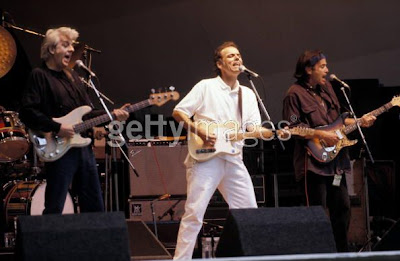 I think I can safely say that the live version of "Little Sister" above was recorded on one of those nights when, as Hiatt observed, the whole place was vibrating.

And there's a postscript: Hiatt again, from the same article.

None of us has spoken to any of the others about it since, but I still hold out the hopes of a second record. Maybe I'm dreaming. So as I'm the one who keeps talking about it....I think I'd better pick up the phone."

I've always loved that record. Still play 3-4 songs from it all the time. Great stuff!!

Is there a full recording of one of the live sets, love to have it.

I think it's interesting that Nick Lowe was in two of rock's failed super groups: Little Village and Rockpile. What do you make of that Steve?

I think Hiatt is the most generally-ignored super-musician-songwriter-singer in the world.

ROTP, that is a good point. I have always considered him a likeable fellow, but then I have never met him! His recent work is KILLER!

Come to think of it, it is all killer!

How did I not know about this??? I'm so embarassed. Going to have to get the C...NOW

I share Anonymous' wonder that two bands whose assets looked so good on paper (Rockpile, Little Village) should have produced so little distinctive music. Rockpile is the big mystery. That really should have worked. Little Village maybe needed a girl singer that they were all in love with, to give them that extra edge.

I remember an interview with Hiatt admitting he had a "lot of apologizing to do" after the recording of the album. He may have even said he (Hiatt) was an "a**hole," but I'm not sure on that point.
Dave Edmunds tried to work with Nick Lowe again after a several year hiatus, and had some unkind things to say about Nick. Nick fits in well on the latest 2 Bill Kirchen discs, and I think Sal wrote Nick still plays/has played with Cooder and Keltner as Guitar, Bass and Drums.
Edmunds also had issues with Jake Rivera, Rockpile's manager.