So I was cleaning and making a space for the tree this morning, the TV on as background noise, and a commercial came on to the tune of "Daydream Believer." 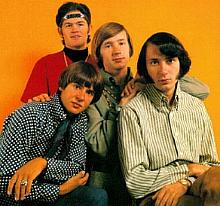 I'm one of the generation which rolls their eyes at such things: for us the term "sell-out" was still an insult. Cross-marketing, where a song was released as a commercial for something and on an album simultaneously, was a later innovation. I was once told that the amount of money involved in such negotiations is phenomenal: the topic was the Cheap Trick song "Surrender," which the band itself had apparently rerecorded, sans the majority of the lyrics, for an amusement park commercial. (I thought it was a cover, but someone who's hipper about this sort of thing than I assured me that it was, in fact, Zander singing.)

In any case, I heard "Daydream Believer" and rolled my eyes, then thought for a bit about the silliness of that response. The Monkees could not have been coopted by mass-marketing: they were themselves a creation of mass-marketing, as self-conscious an invention as Menudo or the Backstreet Boys.

Give them this, though: they had some self-awareness:

Hey, hey, we are The Monkees,
You know we love to please,
A manufactured image
With no philosophies.

You say we're manufactured.
To that we all agree.
So make your choice and we'll rejoice
In never being free!
Hey Hey we are The Monkees
We've said it all before;
The money's in, we're made of tin,
We're here to give you more!

When I was a kid, I loved The Monkees with the wholehearted and unquestioning affection of youth. (I see "Head" premiered on my second birthday as well....) I guess I knew that they were packaged and a ripoff, but that didn't bother me. Of course, as a preschooler, I was probably close to the ideal demographic.

I went through the usual disdain for them as I aged, taking to heart the adolescent sneer which cast everything I had once loved under a dark shadow. When college came, I found drugs and "Head"--but this also happened to be during one of the various resurgences of The Monkees--this time courtesy of MTV, which was, at that point, making some of their early forays into conventional programming (1985 or 6), and The Monkees were one of the first programs they revived. So for a while, they were everywhere: hell, I even saw them live (sans Nesmith, of course, though I saw the Christmas special when he rejoined the band, too). That phase of my life, too, I boxed up, labelled and stored in the back of a closet.

But as I've gotten older, my perspective has softened. Partly, I see them as a symptom of a time when power pop was deemed worthy of coopting for the mass market: that in itself is fairly amazing these days, when only rap gets that sort of treatment (50 Cent has a movie? 50 freakin' Cent?). So there's that. But I also look at the narrative of the development of the Monkees from "manufactured image" to something resembling a real band. (Not much of a country person, but I like Nesmith's country rock stuff a lot--"Sweet Young Thing," etc.) I don't know how much I credit the mythos--stuff like Nesmith putting his fist through a wall and warning a record executive that it could have been his face--but I don't think there's any question that the crises of the market and artistic credibility met and fought it out on that field.

So when I hear "Daydream Believer," I reserve the right to roll my eyes a bit, even knowing that the song was conceived simply in order to be marketed. But I'll always see the Monkees in sort of a liminal space, unable to dismiss them entirely.
Posted by NYMary at 11:14 AM

I saw the Monkees at the old Chicago Stadium in July of 1967. My father drove us there on one of the hottest days ever. I wore a blue and white gingham dress with puffed sleeves from the Montgomery Ward catalogue. We agonized for weeks about what we would wear. Our seats were were on the main floor, and despite promising each other that we would NOT act stupid - the better to be noticed by Micky Dolenz and Davy Jones - we stood the whole time alongside the other stupid (mostly) 11 year-old girls. I can't remember how I talked my mother into it. It had to have been the result of Sisyphean effort. Well, anyway, "Cheer up, Sleepy Jeanne, Oh, what can it mean..."

I think I have a Monkees album around here someplace....

I always liked the Monkees. They make me laugh, and they're tunes are catchy.

There's no shame in just enjoying them for the songs you like, Humans did write and perform these songs, and "Stepping Stone" is for them a nasty piece of business that's aged very well.

Today's commercial power pop is a lot more evil than the Monkees or even the Banana Splits! The Monkeees at least had quaint going for them.