Courtesy of lavalamp, we find this curious piece of rock and roll history. 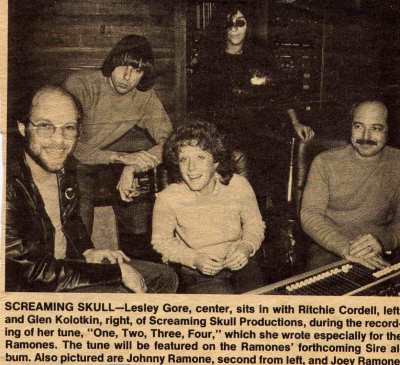 One of the trickiest issues with this genre, and one which routinely bedevils me, if whether a band is power pop or not--and it's a question I get asked all the time. Usually, when someone asks me to define the genre, I use Cheap Trick as my example, since they're a band most people know and pretty representative of the form. But The Ramones are trickier, because they're not so decisively in this camp. Nevertheless, I'm always happy to claim them, and this is a prety compelling piece of evidence.

Confession, though, and a request for help: I can't seem to find this song on any of my Ramones records, or on any of the several online discographies I checked. Any idea if it came out, maybe under a different name? Googling The Ramones and Lesley Gore only seems to produce this pic and sites on which they're both discussed seperately. So I'm at a loss. Cordell doesn't seem to be associated with The Ramones until Subterranean Jungle in 1983 (but he's the guy behind the Joan Jett cover of Tommy James and the Shondells' "I Think We're Alone Now," so there's a certain kind of operative logic here); Ms. Gore's hair certainly says 1983 to me. (Well, that's what my hair looked like in 1983, anyway.) But the song itself seems lost. Any ideas, pop sleuths?
Posted by NYMary at 7:02 PM

HI folks. I got here thru Eschaton comments and it is a GREAT reprieve from what I was looking/reading. I graduated in 1980 and loved PowerPop. I don't think it was called that at the time, perhaps New Wave was the genre given. I liked a band that I thought was going to be the next Beatles. Their name? The Beat. Remember them? I would love to get their first album on CD. Any idea on how to get it? I am new to finding old favorites but would gladly start if I know how to find this one. Any ideas?

The first two albums are available as a single disc from Wounded Bird Records.

According to http://www.ramonesonline.com/demos.htm, 1234 was an unreleased demo from the Subterranean Jungle sessions.

Ahhh! Wounded Bird Records. Thanks Mary for the tip and your excellent site. You have a new fan.