Excellent video news from the Windy City: Ace pop/punk rockers, Friends of PowerPop© and all around cool guys The Safes just made their national television debut!

Here they are on January 29th on WGN-Chicago (hey -- it's a SuperStation!!!) with the ultra kinetic and infectious "Fairy Tale Tomorrow" (from their debut album Well, Well, Well.)


As you can see, these guys are a terrific little outfit with charisma to burn, and they have boatloads of great songs. At the moment, they're world famous only in their home town, but if ever a band deserved to impinge on the national consciousness, it's them.

Incidentally, at this point I should note something I also noted the last time I wrote about them -- that they're the subjects of what's easily the cleverest and most artful group photo of the 21st century so far. (Note Brian Jones and company in the background. Heh heh.) 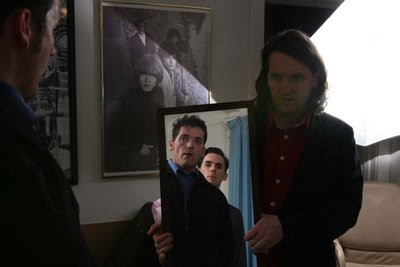 For in our friends in Austin, Texas I should also add that the band is doing a bunch of club shows at SXSW next month. Here's the schedule; if you stop in to see 'em, make sure you say hello.

For more about these guys -- including links to where you can either download more of their music (from iTunes et al) or buy the actual CDs, go here ASAP.

Wow! I love a good trio. And the drummer wears a tie! That's a plus.

Dapper bunch of guys, aren't they. Seriously -- they would have killed at CBGBs back in the day. Thanks for posting this...