Future Events Such as These Will Affect You in the Future

I know what you're thinking -- what the world really needs right now is a tribute album for pioneering first generation British punk bands The Sex Pistols, The Clash and The Damned. 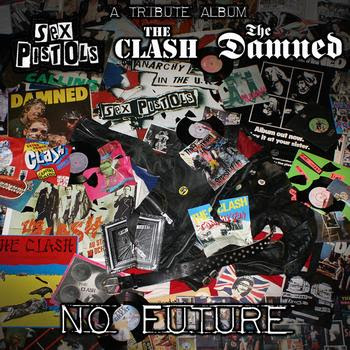 The short version (from the press release):

There are 18 tracks on the album, with 6 tracks each dedicated to the Pistols, the Clash and the Damned. All the bands were tasked with providing covers of a high standard. Expectations were high, and yet the artists managed to create something new & radically different.

Having now listened to it, I can report that while No Future is as patchy as most tribute albums tend to be, there's nothing on it that dishonors the originals. I can also report that I find it perhaps overly amusing that the Sex Pistols Experience is billed here as "the UK's top Sex Pistols tribute band"; I'm assuming this means that there's more than one. Heh.

In any case, not being a huge Damned fan, I was surprised that the Leatherface cover of "Melody Lee" below...

...got under my skin in very short order. I should also add that Steve Drewett's version of "Capital Radio" is the bees knees, as today's kids say.

Bottom line: You can -- and on balance, I would say you should -- order it over at Amazon here.
Posted by steve simels at 12:05 AM

Still a lot of noise as was the originals. Never got into the punk thing really, and I went through it first hand. The Pistols, 2-3 songs tops, The Clash, 4-5 songs maybe, and the Damned (I'm with you) never really got into at all.

I guess some or most of us went the Rock/Pop way. With my nerves at this point being 3/4s shot half the time, I should be listening to Perry Como and Jim Nabors. Or taking the Easy Listening road with Ray Conniff and Mantovani.

There was an album a few years ago wherein a bunch of indie rock types covered the whole of "Sandinista!" Not as gruesome as it sounds - actually pretty good, as these things go. (I've gpt is, somewhere. Let me see if I can dig you up a copy...) - bill buckner

Apropos of nothing, "Attila the Stockbroker" is the best band name I've heard in a long time. Made me laugh.

I was going to say the same thing about Attila. Great minds, concentric circles, etc.
:-)

Loved the Damned, and not just because they had the greatest vampire frontman in all of rock and roll. The songs were a ton of fun as well.

Had the fun opportunity to play w/ the Sex Pistols Experience a few years back. It's like Mini-Kiss in that they're officially-sanctioned (I guess by Johnny and Steve?) to be THE cover band for the Sex Pistols. They told us that cover bands are incredibly numerous over there, where if your band has a hit single then within 3 months you'll have your own cover band. Good buncha fellas and their "Steve Jones" apparently played on Spice Girls albums, among other Britpop acts...