No Listomania -- musical or cinematic -- this weekend, mostly because I'm approaching burnout from anticipating, organizing and co-hosting a de-facto college reunion happening on Sunday. Which, as you may recall from an earlier self-indulgent essay, will feature the first screening in decades of an artsy 16mm student film from 1970 -- Party -- in which my then band (we were called God, don't ask) performs absolutely live in a concert sequence.

Nobody involved with this flick -- including the two stars, who have a nude love scene -- has seen the damn thing since the middle of the 70s, so apart from the whole catching up with 30 people I haven't laid eyes on in years, this is going to be an interesting afternoon, I'll tell you that for free.

Here are two more screen caps director Jeff Alan thoughtfully sent me -- it's from a concluding bit where my bandmate Tony Forte smashes a cheap Japanese guitar (bought specially for the occasion) in an homage of some sort to Pete Townshend. Or possibly Jeff Beck in Blow Up. 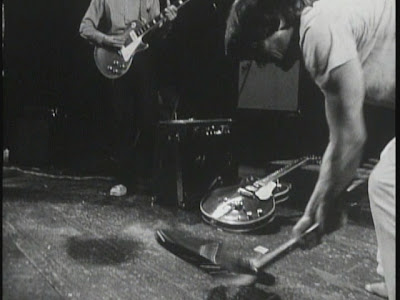 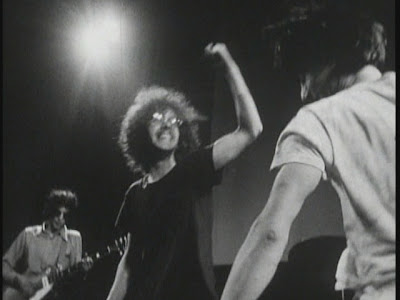 Wny I'm shaking my fist at Tony is beyond me; frankly, I don't remember much about the filming.

In any event, I'll let you know how the soiree shakes out. And the movie is going up on YouTube as soon as I can figure out how to do it.
Posted by steve simels at 12:01 AM

I would NOT like to see my naked self from 1970, let alone in a group of people who knew me then, let alone with the girl I was naked with and hadn't seen since....

It would be like one of those childhood anxiety dreams where you go to school in your underwear.

For what it's worth, IIRC it's a very brief scene, and tastefully done, as we used to say.

On the other hand, I'm certainly glad it's not me in the altogether...
:-)

So are we all, steve.

So are we all.

frankly, I don't remember much about the filming.


You know, I've heard about the shenanigans of you hippie types

I'm pretty much of a prude, if truth be told. I get embarrassed when they take the panties off lamb chops.

I get embarrassed when they take the panties off lamb chops.

Is THAT what got Shari Lewis thrown off television? For shame!

Who the hell is that other guitar player in the background in that one shot? Did you ever figure it out?