Oh hell, this is just such sad news: Clarence Clemons, the legend-in-his-own-right saxophone player of Bruce Springsteen's E-Street Band (and probably the greatest stage foil/second banana in rock history) died over the weekend at the (too young) age of 69. 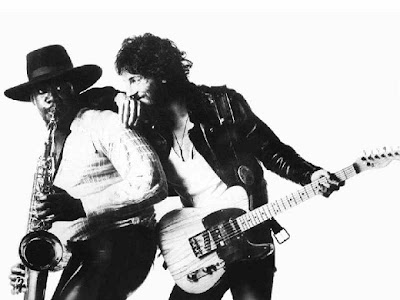 Of course, in recent years, as the jazz and r&b influences almost completely disappeared from Springsteen's music (for whatever reason), Clemons, alas, had less and less to do, both on record or onstage. In fact, by 2007 and Bruce's Magic album, which I actually love, you could barely hear CC playing the glam-rock/ersatz Phil Spector horn lines buried in the mix of the wonderful "Girls in Their Summer Clothes"...


..and as a result, it has become fashionable of late in certain critical circles to say that the guy was in fact a rather mediocre player.

Of course, to the people who say that, I can only reply -- Clarence wailed the passionate, soaring and gloriously melodic extended sax solo on "Jungleland"...

...and just out of curiosity, what have you ever done that's remotely as memorable and moving? Or likely to be of as much interest to anybody fifty or one hundred years hence?
Posted by steve simels at 12:01 AM

Springsteen played the old Stanley Theater in Pittsburgh four times in 1978 and those shows were game changers for me.The subsequent dozen or so times I have seen the E Street band only reinforces my belief that any critic of Clarence Clemens never heard him when he showed up for work.

Sad news. He was a great musician and an even greater presence.

vanwoert: Bruce Springsteen's address book from the early years in NJ is preserved in the R&R Hall of Fame, and it contains the phone number of a sax player he'd just met that night: The scribbled named is misspelled "Clarence Clemens".

Now, having played in bands with sax players, I can sympathize with Springsteen's dilemma: the sax is outrageously great in some songs, and totally out of place in others -- the question is, what do you do with your sax guy during gigs on the songs where he doesn't fit in? Is he just supposed to stand there, bopping? (Also, if the leader of the band is a guitar player, it's difficult to communicate with a sax guy on every level: they speak a different emotional and musical language.)

The path of least resistance is that the sax guy winds up playing -- something, even if doesn't add anything to the song. As a result, the sax loses its specialness in the band, and the next thing you know, you're sound just has this overall sax-y texture -- when what you really want is a guitar texture. Over the course of the E Street Bands career, less Clarence would have been better. But then, it wouldn't have been a band.

Whenever Bruce would introduce all the band members during a concert, who always - always - got the loudest & longest applause?

Steve, you nailed it in that last paragraph there. Screw anybody who thinks he was a mediocre musician. This is a great and stunning loss. My first Bruce shows were on the River tour and the solo in Jungleland was always a highlight, with Bruce standing on the piano, pumping his fist to the song, which of course caused the entire crowd to do the same. Frickin' transcendent.

vanwoert, the shows I mention above were at the Civic Arena in Pittsburgh in late 1980. The closest I got to the Stanley Theater gigs in '78 was to drive by, read the marquee and feel crushed that I wouldn't be attending. The Stanley was an incredible venue and I'm sure the shows were life-altering. You've very fortunate to have been there.

Verification word: gunfeti. Add a second "t" and I think we have a cool album title.

Who's been dissing Clarence? WHO? I will smite their MFing asses! The E Street Band literally changed my life - first saw them as a teenager during the "Darkness" tour, and it was a Game Changer. (That was the era when most of my friends were heavily into Styx and Rush.) It's never been fashionable to love Springsteen amongst many of my Little Musical Friends, but I don't give a shit - like you said, we'll see what endures. (And as I said to Ina yesterday, it's really hard these days to convey to anyone under 30 just how great that band was in its prime...) - bill buckner

I saw Bruce for the first time in the movie "No Nukes" ... he was a deep breath of fresh air. What was surprising was that the music was totally new and totally familiar at the same time: the distillation of everything great that had come before it, infused with Bruce's incredible energy and joy. His brilliance as a songwriter and performer made my pulse race.

Diss Clarence? Diss Bruce? Not in this lifetime.

The Big Man will be missed. RIP Clarence.

This version of "Spirit in the Night" from that same Jersey show really shows the dynamic betweem the Boss and the Big Man.