Okay, this is just too funny. An inspired wiseguy named RJ White has got a website at which he he posts mock-up fake DVD box cover art for Criterion Collection editions of movies you wouldn't...er...expect Criterion to actually put out. 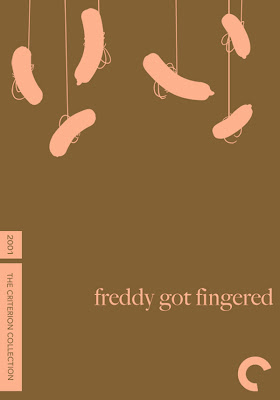 Ah, Freddy Got Fingered. I actually got decent money to review it over at the TVGuide website in 2001, although in retrospect I probably should have put in for combat pay.

As I wrote at the time this little number hit the multiplexes, how you might respond to a film by then fashionable MTV irritant/auteur Tom Green is, shall we say, a matter of taste, although using the word taste in a discussion of Green obviously requires several leaps of faith. In any event, when I saw FGF at a screening, I seemed to be surrounded by two basic demographic types -- people who laughed uproariously every time its star fondled the penis of a large animal, and people who headed for the theater doors with a speed usually associated with pursuit by the Hounds of Hell.

It's also occurred to me since that Freddy Got Fingered is, on one level, positively inspirational; if you've ever wondered whether you could write and direct a big-budget feature film that could be deemed worthy of release by a major studio, one viewing of this exercise in willful stupidity would be a world-class confidence builder. Amazingly enough, it has a plot; aspiring cartoonist named Gord Brody (Green) labors mightily to convince his blustering father (Rip Torn) that he's not the slacker moron everyone — including the audience — quite correctly assumes him to be. The obligatory subplots include one involving Gord's handicapped girlfriend, Betty (Marisa Coughlan), a rocket scientist (really!) obsessed with fellating her unrealistically unwilling swain, and another about Gord's younger brother, the titular Freddy (American Pie's Eddie Kaye Thomas) and false charges of sexual abuse (this is where the fingering part comes in). Really now, could anything be more hilarious?

To be scrupulously fair, this is not perhaps the worst gross-out comedy ever made, although it's hard to ignore the strain of gratuitous cruelty that runs through it (a running gag features a little kid getting the crap whacked out of him repeatedly). Also: Green deserves numerous demerits, above and beyond the awfulness of the film, for restaging the classic Buster Keaton falling house gag without its visual punchline (i.e., you never see Gord standing, unhurt, amidst the rubble).

I should add that the estimable A.O. Scott -- who's pretty much my favorite critic in any field -- actually made a case for the film as some kind of genius avant-garde performance art in his New York Times review back in the day. I've forgiven him for it, although I still find it baffling.

I should also add that a coveted PowerPop No-Prize will be awarded to the first reader who guesses its relevance to the theme of tomorrow's Weekend Cinema Listomania.
Posted by steve simels at 8:32 AM

Note to self: Items about mercifully forgotten bad comedians, even ones meant as snark and parody, are less interesting to readers than expected.

The obvious theme would be "Worst movies starring a comedian."

The Diceman, of course, would be top on the list...

Movies least likely to be released by Criterion?

Trust me. Napoleon Dynamite is The Godfather Parts I and II compared to Freddy Got Fingered.

Movies by people inexplicably married to starlets sooo far out of their class?

Movies about people not Hitler, who have only one ball?

The great and not so great movies of Rip Torn?

Okay, jackd got it close enough.

Congratulations, my friend -- your coveted NoPrize is coming at you by worm caravan as we speak.
:-)