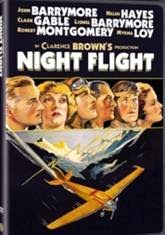 Video event of the week: Might Summit Entertainment's DVD of the latest Nicolas Cage piece of action crap Drive Angy by any chance be what we're talking about? Are HBO's respective disc version box sets of the vampire soap opera True Blood: The Complete Third season, conceivably in the sanguinary running? Or is it by any chance possible that Paramount's Blu-ray update of Sergio Leone's fabulous Once Upon a Time in the West is, in fact, The One?

All worthy (except for the Cage movie, obviously) but for my money it simply has to be Warner Home Video's release of MGM's unseen for decades and quite spectacular version of Antoine de Saint-Exupery's classic novel Night Flight, directed by Clarence Brown.

By unseen, we mean that it was pulled from circulation in 1943, although the reasons are unclear; presumably, some sort of copyright dispute with the publisher's of the book. In any case, the film -- the story of heroic aviators trying against desperate odds to deliver polio serum while the women they love bite their nails -- is a sort of action-adventure version of one of Metro's all-star parlor dramas a la Grand Hotel and Dinner at Eight, which is to say that Clark Gable, John and Lionel Barrymore, Helen Hayes, Robert Montgomery and Myrna Loy try their damndest not to be upstaged by some extremely impressive aerial photography of rickety biplanes in the South American skies. As you might expect, it's something of a curio; Brown's direction is alternately ahead of its time (very impressive relentlessly moving camerawork) and old-fashioned (the actors mostly declaim as if they're in a Victorian melodrama), and the aforementioned quite breathtaking aerial photography is interrupted by a lot of surprisingly unconvincing process shots. Still, as vault exhumations go, this one is a doozy, and it's nice to have the picture available finally, especially in WHV's razor sharp transfer (the print itself is in mostly first-rate shape). 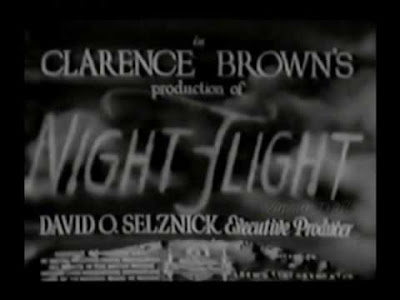 In any case, you can -- and I think it would be a good idea -- pre-order Night Flight over at Amazon here.

And with that out of the way, and because things are doubtless going to be a trifle quiet around here for a while, here's a fun and clearly relevant little project to help us wile away the hours:

Former Charlie's Angels pin-up Cheryl Ladd stars as one of a group of cops from the far future who comes to our present to stage plane crashes in order to avert a holocaust that has rendered the human race genetically impotent in the 30th century. Or something. Not as bad as it sounds, actually, and who knew Ladd could act? Not so sure about frequently mistaken for a 2X4 co-star Kris Kristofferson, though.

Vintage Republic serial nonsense, with a villain -- The Lightning -- who is pretty obviously the inspiration for Darth Vader, and whose villainy mostly takes place aboard his fabulous Flying Wing, a giant futuristic aircraft-carrier-in-the-sky recycled with great glee from an earlier (less amusing) Dick Tracy serial.

Great flying scenes, an amazing cast including Cary Grant and Jean Arthur, and typically snappy Howard Hawks-ian dialogue and action, and yet Angels has always left me cold. I mean, I like Hawks as much as the next auteurist, but in this case all that macho romantic fatalism and bravado seems kind of creepy. IMHO.

And the Numero Uno "up, up and away!" epic of them all simply has to be...

For obvious reasons (NOT Fred and Ginger). And also for one immortal line, when a WASP-ish socialite, upset that star Delores del Rio seems to be getting all the guys, asks "What do Latin girls have south of the border that we don't?"

Alrighty, then -- what would your choices be?
Posted by steve simels at 8:57 AM

Okay, I'll say it if nobody else will.

Saw an SNL skit yesterday where one of the regulars was playing Nick Cage being interviewed by Bradley Cooper (the real guy). "Nick" said his life coach was Mel Gibson. Cooper then asked him who his accountant was: "Wesley Snipes".

heh. Which brings us to the topic at hand. "Passenger 57" sucked.

"Bright Eyes" -- in which it is revealed that Shirley Temple's Good Ship Lollipop is an airplane!
Plus: Jane Withers.

Phantom Creep, thanks for citing "Airplane." "I like my coffee like my men..." "I speak jive..." And RIP Leslie Nielsen.

OK: "Always", with Richard Dreyfus and Holly Hunter, but it was John Goodman who made the movie. I cried at the end, just a little.

Big disappointment (obviously not just to me): "The Aviator."

"What do Latin girls have south of the border that we don't?"

Anyway, I second "Airplane!" ... right from the opening shot of the clouds with the theme from "Jaws" ...

I'm also rather partial to "The High and the Mighty." But mostly for the whistled theme song by Ernest Gold. Or was it Dimitri Tiomkin?

j'ever see "No Highway in the Sky" with Jimmy Stewart and Marlene Dietrich? He's an aircraft designer who wrecks a plane on the ground to keep it (he believes it's unsafe) from flying? Not exactly good, but somewhat unexpected.

I agree with FMGC on "Memphis Belle". My brother calls it "Male Models Go to War", but I found it exciting in parts. I also liked the dogfight scenes in "Flyboys", the recent WWI air story -- although the rest of it bit (and I suspect that the dog fight scenes are probably done equally well in some video game somwhere). No faves here!

I haven't seen it in a long time, so I'm a little concerned about how it holds up, but from 1975 I nominate The Great Waldo Pepper, starring Robert Redford and directed by George Roy Hill. It's set in the barnstorming '20s, with some of the most beautifully shot aerial scenes ever committed to celluloid. Hill was an aviation buff, and his love for aircraft comes through in the movie. Redford is pretty good, and there's a decent early Susan Sarandon role as well, but the flying sequences are the stars. Amazon tells me there's 2010 widescreen DVD out, but I would love to have it in Blu-Ray to see if my memory of the cinematography holds up.

On the other side, I actively despise Philip Kaufman's The Right Stuff. Wolfe's book is one of his bests, and one of the best aviation books ever too, but essentially unfilmable - which this movie proves.

I recall Waldo Pepper as being pretty impressive too; might be worth reassessing.

I'm also surprised nobody's nominated The Blue Max. Or -- and I'm not kidding about this -- The Hindenberg.

Based on my recollections of having seen them on TV over the past 15 years, I can testify that Blue Max, the Hindenberg and Waldo Pepper all hold up, somewhat, with Waldo Pepper being remarkable for what today seems an almost irresponsibly (considering the budget) leisurely pace. The sets in Hindenberg seem static and elephantine (after all the great zeppelin movies -- including UP -- we've seen since), but you have to admire what they were able to do without CGI.

No shout out to Wings, the very first Academy Award Winner?

And how about Howard Hughes' Hell's Angels?

I've seen Waldo Pepper fairly recently and it definitely holds up. One of Redford's best!

Flying Down To Rio was the best movie ever made by 'murcains. How can you beat a film in which women dance on the wings of airplanes while the band is playing in the club below? THAT'S what made America great!