Guys Without Gals. Or Something.

And speaking, as we were last week, of the fabulous Rascals Once Upon a Dream retrospective/concert show on Broadway -- for which Little Steven Van Zandt deserves numerous props in Heaven -- I found myself thinking of Men Without Women.

The astounding album Van Zandt made, in 1982, featuring the godlike ex-Rascals drummer Dino Danelli on those pagan skins.

And from it, please enjoy "Under the Gun." 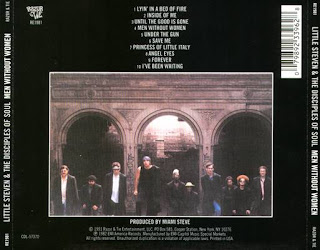 You're welcome.
Posted by steve simels at 8:57 AM

Memo to self: If you're gonna pimp these posts to Facebook, don't be surprised if nobody comments over here.
:-)

There's a reason these guys are without women. It lacks a certain je ne sais quoi. If that's Steven singing, he shouldn't.

Yup, that's true. Much like most of Little Steven's other solo stuff, it doesn't quite "gel"...

Always loved this record, sketchy lead vocals and all.

Steve, I picked this up on the strength of your review in TMFKASR, and have not regretted it a single day since. This one and Southside Johnny's Hearts of Stone have really held up well.

Both of those Little Steven albums from that time are killer. Voice of America can still make me rage.

The sound on both of them has always seemed a little wonky to me, though. Would have loved to hear a Don Dixon (for example) production.