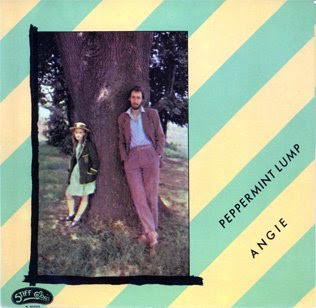 This single's provenance totally baffled me at the time, but thanks to the miracle of the Google, here's a little background info from Angie's management updating the story to 1998.


Another Google search revealed she was still singing professionally as late as the end of the previous decade, but of her recent activities I have so far found nothing.

I should add that I first posted this here in 2009, but given that it was even before I had discovered the now shuttered Divshare, the audio link has long since expired. So enjoy this new one, you ungrateful bastids.

Primordial Who with poppy kickin' lyrics!

According to the label, the song was written by J. Asher, as was the b-side "Breakfast in Naples" performed by Angie's Orchestra! Both arranged and produced by Townshend.

According to the backside of the sleeve it's a "James Asher Conception, Produced by Pete Townshend."

So, unless James Asher is a clever disguise, I don't think there is any question about who wrote the song.

Oh wait, according to Be Stiff: The Stiff Records Story by Richard Balls (Dick Balls? Really?): "The two songs on the record had been written by James Asher, then a staff writer for Pete Townshend's production and publishing company, Eel Pie."

I dunno...there were a few Towsertunes on "Who Came First" that I kinda prefer. And *very* definitely his songs on the collaboration with Ronnie Lane, "Rough Mix", though you might not think of that as "solo" Pete. (Though I *do* still have the original single of "Peppermint Lump" in my collection, while "Empty Glass" and everything that followed are long gone...with the obvious exception of the "Scoop" collections.)

Didn't know about the Buggles connection, though.

But thanks for putting it up...it'd been years since I'd heard it. Guessing that James Asher was a fellow Meher Baba acolyte, given the "don't you worry, be happy" bit.

Pete wrote the lyrics. Asher is just the keyboard bed that Townshend built the song around. Pete also selected Angie to sing it.