And Speaking of Saints...

Clyde Stubblefield was James Browns's drummer and is considered one of the best in the world. Clyde has also been a friend for over 30 years. Back when he was 60 and battling cancer, he and [wife] Jody racked up nearly $80K in medical debts. Then he was approached by Prince's "people". They told Jody that Prince's favorite instrument was drums and he considered Clyde to be a mentor. He offered to wipe out Clydes's medical debt, which he did. His one proviso was that it remained anonymous. 16 years later, Jody finally told the story. 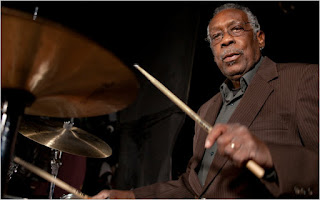 I should add that his drum solo, from Brown's 1970 "Funky Drummer" single, is perhaps the most sampled 20 seconds in music history.

And good for Prince, obviously, is the point of the story. Apparently on top of all his other talents, he was a mensch.
Posted by steve simels at 10:01 AM

Not only is he with us but he's still drumming like crazy. I saw him a few weeks ago at his regular Monday night gig. He injured his thumb a couple of years ago and had to have part of it amputated. He had to relearn how to hold a drumstick but he as good as ever

it's nice to help people out, a good thing. Especially when you have a lot of money.