Your Tuesday Moment of WHY DIDN'T I GET THE MEMO?

From 2010, please enjoy Sara Bareilles and "King of Anything," AKA the best fricking FUCK YOU -- I DON'T REALLY NEED YOU RELATIONSHIP BREAKUP SONG (FROM A FEMALE PERSPECTIVE) since "No Guilt" by The Waitresses. (Which was written by a guy, come to think of it. But I digress.) 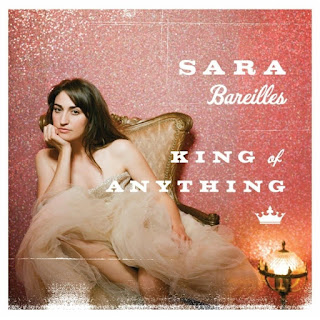 In any case, I don't know how this one slipped under my esthetic radar until last weekend, but damn, girl -- that is just an amazingly great song and production.

For the handclaps alone, actually. And by the way, the fact that this lost the Grammy to Lady Gaga's drecky "Bad Romance" is reason in and of itself to nuke NARAS.

UPDATE: It just occurred to me that Bareille's song is rather obviously inspired, arrangement wise, by the only Annie Lennox record I ever loved.

Which I don't mean as a criticism, BTW. You know the saying -- great composers steal, mediocre composers borrow.
Posted by steve simels at 9:18 AM

What?! No love for 'Thorn in my Side' or 'Love is a Stranger'? Annie Lennox rules.

What? My youngest daughter familiarized an always skeptical me with Sara. I think "King of Anything" is one of the most lightweight things she's done. Sometimes the best way to say fuck you to someone is to just say "Fuck You." What "feminist" sits around waiting "for someone to tell me it's my turn to decide." This is lightweight, cutesy empowerment. But it's got hand-claps.

However, I love Bareilles' "Vegas" and "Gravity." Different strokes, right?

VR - I can almost taste the chicken enchiladas at El Coyote, I'm so hungry. Gotta run.

I had not heard the original until you posted today's clip. My reference was a live version on Bareilles' 2013 album on Epic, Brave Enough - Live At The Variety Playhouse (in Atlanta, GA), where midway through the song, Bareilles forgets the lyrics, admits doing so, and her adoring fans pick up where she left off as Sara continues at the piano. AND her fans provide the handclaps. It's a gem of a live listening experience.

Her last five or six albums have been on Epic, and to me she sounds like a contemporary Carole King, and I'm just surprised she's not bigger than she already is. For a major like Epic, regardless of under whose umbrella the label sits these days, to continue to release albums by a pop artist like Sara Bareilles is remarkable.

And as for telling someone "fuck you," being blunt and being a tad more sophisticated are not always mutually exclusive. My middle brother, a tax attorney who passed away eleven years ago, and who could be brutally funny while ripping someone's head off (he liked the self-description of "pit bull on crack"), told me long ago -- with great glee -- a line he used only once or twice to tell someone off and shut them the fuck up at the same time. "Fuck you," he'd say, then pause, then ask, "Am I the first to tell you to go fuck yourself today? Or was your mother asleep when you left the house this morning?"

Feel free to substitute boyfriend, girlfriend, children or anyone else for "mother."

Jeez, I think the song strikes a terrific balance between sensitive and snide. That "delusional sunset" line cracks my shit up every time.

And I agree with the Carole King comparison. I think if she had been born a few decades earlier, Bareilles would have done very well toiling at the Brill Building.

I prefer the Annie. I like my music from women not young girls.

Carole King is a legend. Anybody with half a brain knows that. But her best songs are with Gerry Goffin's lyrical input. When she wrote both words and music, the former suffered. I think Bareilles is a better lyricist than King. She is also a better singer, both technically and emotively. Perhaps a better pianist as well.

Mark, I'm not sure why you find it remarkable that Epic Records continues to release albums by artists like Sara. Her records sell well. The market loves female singer-songwriters. All of Her Epic studio albums have been in the Top Ten.

I've seen her in concert and mostly enjoyed it. She does a delightful cover of Cee Lo's "Fuck You."

VR - Hotter than the Hindenburg :-)

yeah, she's legit AOR/MOR - judged the tv acapella competition, the Sing-Off, for a couple years along with Ben Folds and a Boyz II Men alum, which you probably weren't aware of if you didn't have my parents.

VR...my youngest daughter also intro'd me to Bareilles. Also...for a real interesting FU song see Kathleen Edwards Back To Me

Totally agree with Rich's vote for Kathleen Edwards. Some great talent there. She has lots great FU songs.

Call me old fashioned, but I'm kinda partial to "(I'm Not Your) Steppin' Stone" and "Ride On Baby" when it comes to 'fuck you" tunes. They rock and were garage staples in my area. Of course one could have a listomania regarding the subject, given the wealth of songs from which to choose. The Pretenders "Pack It Up" comes to mind. And lots of Dylan. Kathleen Edwards, meh. It's got nothing on "Shitlist." One of these days these boots are gonna walk all over you .... Are you ready boots? Start walkin'.... You'll think about me when you fuck her.