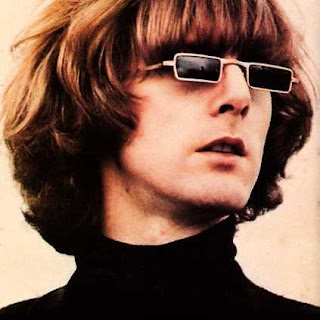 If I had to pick the one musician in my lifetime who's meant the most to me, it's him. And for a very simple reason: Because a Rickenbacker 12-string, well-played, is in my opinion the most beautifully occurring sound in nature.

Here's the definitive stereo mix of The Byrds' epochal "Mr. Tambourine Man" to illustrate what I mean.

And (via Wiki) here's Roger on the genesis of that sound.

While "tracking" The Byrds' first single, "Mr. Tambourine Man", at Columbia studios, McGuinn discovered an important component of his style. "The 'Ric' by itself is kind of thuddy," he notes. "It doesn't ring. But if you add a compressor, you get that long sustain. To be honest, I found this by accident. The engineer, Ray Gerhardt, would run compressors on everything to protect his precious equipment from loud rock and roll. He compressed the heck out of my 12-string, and it sounded so great we decided to use two tube compressors [likely Teletronix LA-2As] in series, and then go directly into the board. That's how I got my 'jingle-jangle' tone. It's really squashed down, but it jumps out from the radio. With compression, I found I could hold a note for three or four seconds, and sound more like a wind instrument. Later, this led me to emulate John Coltrane's saxophone on "Eight Miles High". Without compression, I couldn't have sustained the riff's first note."

"I practiced eight hours a day on that 'Ric,'" he continues, "I really worked it. In those days, acoustic 12s had wide necks and thick strings that were spaced pretty far apart, so they were hard to play. But the Rick's slim neck and low action let me explore jazz and blues scales up and down the fretboard, and incorporate more hammer-ons and pull-offs into my solos. I also translated some of my banjo picking techniques to the 12-string. By combining a flat pick with metal finger picks on my middle and ring fingers, I discovered I could instantly switch from fast single-note runs to banjo rolls and get the best of both worlds."

Happy birthday, Rog, and many many more.

Roger's 12 string solo on "I'll Feel a Whole Lot Better" is the frosting on the cake...

When I saw the photo of McGuinn before reading your headline I said to myself oh shit now he's gone. It's been that kind of year.

Thank you that you came to praise Caesar not bury him, he is the best. One of my biggest regrets is that after Notorious Byrd Brothers he backed off featuring the 12 string as the primary lead instrument in both the Byrds and his solo career. Didn't he know or care how special it sounded?

He was the only member of The Byrds deemed good enough to play on "Mr Tambourine Man", along with The Wrecking Crew.

Does anybody know the real story of what that religion was about that made him change his name from Jim to Roger?? I remember hearing the name of the religion; (can't think of it now); but I never heard anything about what the beliefs were.
And why didn't he change his name back when he parted ways with them?

P.S. How about the 12 on "Renaissance Fair"? That always blew me away.

Here's a shout-out for Chicago's Old Town School of Folk Music, where Jim McGuinn picked up the banjo and the 12-string. It's a wonderful institution.

McGuinn really is underrated as a guitar player.

The other thing I love about McGuinn was his influence on Tom Petty.

Changing the subject, I see where Sir Mick is going to be a daddy again. # 8 at 72. His granddaughters are 24 and 20. It's going to be strange for them to have an aunt or uncle who is young enough to be their child.

Supposedly the Indonesian Subud (I don't know anything about their beliefs) guru sent McGuinn a whole list of new names, only one of which was an actual, recognizable name. But "Roger" seems perfect for the man, one of the truly nice guys.

Saw the Byrds open for the Stones twice in 1965. MTM had recently entered the local charts. I had the red vinyl promo 45 that I got from a local radio station in a contest. In Berdoo The Bush also played.

The Byrds weren't terrible, but they weren't totally together either. A couple of them looked scared shitless. Of the three bands, they were the least effective live. The Fresno show, where we hooked up with my cousin, was about as shaky.

Sandie's older brother, who was the local pot dealer, turned us on to Dylan around that time. He was a dream and I had the deepest, dirtiest crush on him. Man, did he inspire some of my most expressive finger painting.

Anyway, he tried to introduce us to Dr. Zim earlier but we weren't receptive. Bringing It All Back Home brought us around. We were Dylan newbies and neither one of us gave a shit about the boring "protest" bullshit from earlier. This was an improvement.

So, it kinda bummed us out that the Byrds only sang one verse of the four. I mean, seriously, couldn't they at least have sang two? The frickin' single's only 2 minutes long. They couldn't do my favorite verse?

I know it's a classic, but couldn't they have recorded a long version? It's "Dylan you can dance to", but when you start revving up, the song's over. It's the premature ejaculation version. But sometimes that's the sincerest form of flattery if you look at it right.

When I hear the song I still think of Sandie's dreamy brother. In my mind he was the embodiment of Mr. Tambourine Man. Sad that we never hooked up, but age and the fact that I was little sister's best friend got in the way.

McGuinn put that unique chicken pickin' to good use. A true icon.

So true about Roger and his Ric 12. Never gets old. On that subject, isn't it time you did a piece on that other Byrd genius- Gene Clark? Made a couple of gorgeous solo albums after he left the group. And.... he wrote Feel A Whole Lot Better, I Knew I'd Want You, Have You Seen Her Face, 8 Miles High, among others.
Did a whole lot more than play the tambourine! Check out 'The Byrd Who Flew Alone' Tony J

I interviewed Rog in 1975 when this album came out. Nice guy, but I was a little disappointed when he told me "Basically, I'm a businessman."

Still, the album had this track...

Gene Clark was the best songwriter in The Byrds. The best voice, too.

Interestingly, Roger goes by Jim in his email.

IMO Gene and Michael were the hot guys in the band. As tall and gorgeous as Michael was, Gene's features had more character. He was the "man" of the band. Very masculine. Loved his nose. Bet he knew what to do with it and where the nose goes.

When I first saw them he had the longest hair of the bunch. He was anything but fey. He was checking out the girls in the crowd with confidence. But he was looking for something just slightly older than a precocious sprouter like myself. Sigh. His loss:-).

I'll Feel a Whole Lot Better sold me on his songwriting and singing. Technically it was a B-Side. But in SoCal they flipped it because Cher had a competing version of the Dylan A-Side "All I Really Want To Do". Her version went to Number One in Berdoo.

Frankly, Clark's tune should have been the fuckin' A side in the first place. In L.A. it made the Top Ten. Nationally it didn't even hit the Hot 100. Unbelievable. Of course, as with all their tunes, McGuinn put his indelible stamp on it.

"Set You Free This Time" should have been their third Top Ten Hit but it was too advanced for the general pubes. Cool stuff like "Here Without You" mothered his parting gift to the band "Eight Miles High. "She Don't Care About Time" was also very nice. And then there's the underappreciated "If You're Gone", where he reveals his true, more ragged voice.

Saw him a bunch of times over the years with the likes of Clarence White and Jesse Ed Davis. Even saw Dillard & Clark do a private party on someone's patio. Have some Polaroids of that one. Later, I saw him at a local high school when he opened for burgeoning Loggins and Messina, along with another band from Hermosa Beach. His shows were sparse. We joked that his gigs were about as frequent as a fuckin' comet. Never missed him at McCabe's. It was religion. And I was devout. Too bad he was so fucked up. But Michael was worse.

VR - she don't care about time

he always looked embarrassed to be wearing those granny glasses.