I Am a Schmuck, I'm From Long Island

So I saw Paul Simon -- first time ever, amazingly -- last night in Forest Hills. A very nice concert, the high point of which (for me) was a version of "Me and Julio" that probably rocked harder than anything Simon has ever done in his entire career, with the exception of "A Hazy Shade of Winter" (which he didn't do at the show, alas). 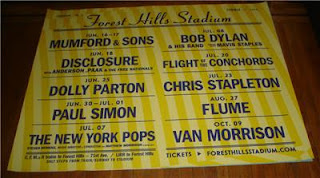 In any case, Simon was in good voice, the sound was great, and the venue was terrific. Nonetheless, I suspect that most of the audience still hasn't gotten the memo about the other guy, if you know what I mean.

In case you've never heard that before, it's from a 1993 Garfunkel compilation album, and it never fails to crack me up. Especially the part about the college tour.

Saw PAUL SIMON about 15 years ago at a venue near the waterfront in downtown Toronto. Good show. The opening act, somewhat surprisingly, was BRIAN WILSON. Brian opened the show with "Sail On Sailor", a song which he co-wrote, of course, but on which did not originally sing lead for the studio version. (Blondie Chaplin did, excellently, on the "Holland" LP)

Anyway, Happy Canada Day to me and any of your other Canuck readers/posters. Blame us if you must...

I have nothing but respect and admiration for the great nation of Canadia.

Happy Canadia Day all. Always gave Canadian bands a PLUS to begin with after discovering Chilliwack in 1970 or 1971.