The Kids Are Alright

In this case, the teenage kids of an old friend and bandmate of mine.

From The Guardian UK, yesterday: 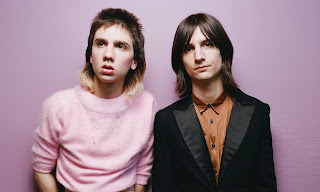 The background: One thing is certain: Lemon Twigs are going to divide opinion. This is, perhaps, a strange thing to say about a band who base a lot of their shtick on two of the biggest groups in pop music history – the Beatles and the Beach Boys – around whom there is unparalleled critical consensus. Nevertheless, there will be some who consider their reference-rich songs to genuflect too closely to the old masters. Others will simply recoil at their very presence, fearing them to be a hipster contrivance, too good to be true, cynically assembled by an evil record company eager to plug a gap in the market. Look at that image of the main members – Brian and Michael D’Addario – accompanying this article: they could be out of the Partridge Family as envisioned by Harmony Korine.

The D’Addario brothers are, respectively, 19 and 17 years old, and they’re astonishingly good at what they do. Talented, for sure. It’s obviously in their DNA: their dad, Ronnie D’Addario, was an all-playing and producing wunderkind of the Emitt Rhodes type who released a few albums of post-Beatles pop in the late-70s. The pair handle all instrumental chores on their forthcoming 4AD debut album, enlisting a little help from two friends when they play live (their first UK gig will be on 19 August at London’s Sebright Arms). Brian plays guitar, bass, drums, keyboards, horns and strings – he owns a trumpet, a violin and a cello and is a fan of the overdub. Michael has “merely” mastered “the basic band instruments” (guitar, bass, keys, drums). “Brian was really good at instruments from a young age,” Michael said. “I didn’t learn any instruments apart from drums till I was 13. Brian had already learned to play bass and drums when he was in elementary school.”

You can read the entire piece over at the Guardian website HERE.

And please enjoy two of the songs from the aforementioned debut album.

I should add that, apart from being annoyingly talented, they're also really, really nice kids. I should also add that if their dad's name sounds familiar, one reason may be that he sang the McCartney-esque backup vocals on The Floor Models' "Letter from Liverpool."
Posted by steve simels at 9:48 AM

Actually, the Guardian excerpt you posted is pretty good for what it is: descriptive. Had I heard the two tracks first, I might've said something along the same lines, but without the put-offish "genuflect too closely" remark. But after reading the entire piece, and listening to the two tracks you posted, the remark is less of a big deal. Even though I'm not a giant Beach Boys fan, I can appreciate the fact that others are, and am even mildly surprised that kids so young, even with a fully-credentialed Dad's influence, can and do appreciate, as musicians -- and are influenced by -- the real thing.

Prodigies are really...weird, frankly. In a good way. When I was growing up, I knew a couple of kids who by 7th or 8th grade were as good as any adult professional musicians. One kid was an absolute virtuoso on piano AND violin, and the other actually organized and conducted a 40 piece chamber orchestra. It's very humbling to watch somebody that young conducting Mozart's 40th symphony, and well.

The Lemon Twig kids are spooky. I'll leave it at that.