[I originally posted this back in early 2014; I'm re-posting it now for reasons that will be obvious downstairs when you watch the trailer for the forthcoming movie with Meryl Streep and Hugh Grant. -- S.S.] 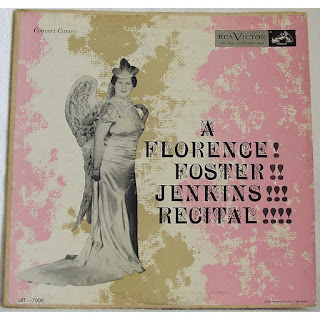 Florence Foster Jenkins was a novelty in the history of music, an operatic coloratura who had all of the requisite charms and trappings worthy of a diva, minus the voice. Married to a wealthy industrialist and well entrenched in upper-crust New York society by 1912, "Madame" Jenkins obtained a divorce that year. The resulting settlement was handsome enough to set Jenkins up in style and to pursue her extensive charitable interests. She had already been studying voice for some time, and her charity fundraisers included such gala events as "The Ball of the Silver Skylarks," involving special costumes made at her request, and usually culminating in a sample of her singing. Jenkins' voice was high, scrawny, and seemed to have a mind of its own, warbling its way through difficult coloratura arias with the grace and control of an upright piano pushed down a spiral staircase. Well-heeled society types would attend Jenkins' recitals and patiently endure her auditory assault, along with enjoying a well-concealed chuckle or two at her expense. Jenkins' annual gala would remain a popular fixture in New York society for decades.

I also love the fact that her accompanist/Svengali was named Cosme McMoon. I'll betcha he was a lot of fun at parties, if you know what I mean.

Oh -- and here's that trailer I mentioned up top.

The movie premieres August 12. I'll be there for opening day, I'll tell you that for free.
Posted by steve simels at 8:58 AM

Never thought of that, buzzbabyjesus (why would I, I never heard of Jenkins until the movie ads started), but it makes sense.

But pinning all that on Marion Davies was a shitty thing to do, even for Welles. Doesn't stop me from loving Kaine, though.

It was really mean of Welles -- Marion Davies was extremely talented and by all accounts a very cool gal.

I'm not sure Susan was in fact based on Marion Davies at all. Kane is fiction loosely based.

If Kane was Hearst, Susan had to be Marion Davies.

Marguerite, a French comedy that was … ahem … based on the life of Jenkins, and was directed by Xavier Giannoli, made a brief appearance in NYC earlier this year. My wife and I saw the Marguerite trailer (see https://www.youtube.com/watch?v=8V2OPBvfosM) at the lovely and talented Kew Gardens Cinemas in Queens. It looked GREAT. But Marguerite departed in two weeks, and we missed seeing the film, though it is already available on Netflix. This Hugh Grant and Meryl Streep version looks a bit broader, but who doesn't like Hugh Grant, and Meryl Streep is good in every film she's in.

I'm with BBJ on the Susan/Marion Davies question. I believe Welles said so himself.

BTW, you think the film will top Ricki and the Flash?

We had that FFJ record when I was a child, although we didn't listen to it much. Dad said it would ruin our voices.

Kane was a composite. I believe there is a fair amount of Howard Hughes in him as well.