Your Wednesday Moment of Who Knew?

That the great Ralph Steadman had done cover art for The Who? I certainly didn't until yesterday. 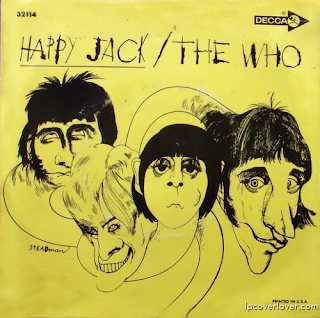 And I'd completely forgotten about the acoustic version of "Happy Jack" above. It's from the 2CD Japanese remastered version of the album, which I highly recommend, BTW. The stereo mixes, in particular, are so much better than anything released in the States it's not even funny.

Never heard that acoustic version before.

It SHREDS the official version.

Love, love, love that cover --- although it does make Roger look rather demonic ...

Nice. Don't think this was ever bootlegged prior to its official release in the 90's. That Steadman caricature was the only early Who US pix sleeve. I got my copy at the Teenage Fair circa Easter 1967. Saw Dick Dale and the West Coast Pop Art Experimental band there that week. And the Seeds. The art was used for the excellent 1980's vinyl bootleg called "Maximun R&B". Nope, he didn't really capture Roger.

The Bongos and strings are a nice touch.

The bongos are a nice touch. The original does have Keith's ferocious drumming, though.

Captain Al: My memory's frightening to some. Was recruited by the government for it when at UCLA, but declined. Besides, the Teenage Fair was a big deal and, man, was I ever impressionable. Plus, I met a guy from Encino there whose parents were gone the whole Easter Vacation. They had a pool, component stereo and a very plush carpet. He had a really radical 1965 candy apple red GTO with Tri-Power. He let me drive it all the time even though I was underage. In the luxurious master bedroom he showed me another kind of Tri-Power. So that's why I remember that particular single so well. Girls don't forget that kind of stuff. What can I say? The Black Nepalese made me week in the knees.

Cool. Real cool. The vocals are killer as is Pete's acoustic.