Just heard that Michael Wackford -- drummer for Starry Eyed and Laughing, the greatest Byrds influenced band ever -- has passed away. 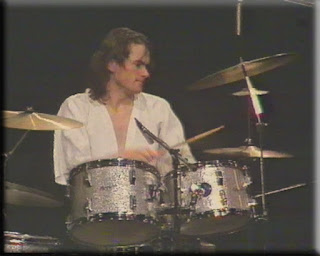 I saw SE&L a couple of times -- interviewed frontman and Rickenbacker ace Tony Poole, hung out with them after a gig on Long Island -- and they were a) absolutely great and b) thoroughly lovely unpretentious guys.

The band was preparing a collection of unreleased stuff when Wackford died in October; you can -- and should -- order it over at their official website HERE.
Posted by steve simels at 9:18 AM

A cover worthy of Todd Rundgren / Faithful.
Thx for the band link.

Go over to Spotify to hear Starry Eyed and Laughing's version of CHIMES OF FREEDOM on their 2013 ALL THEIR BEST comp. Really nice. So much nice music on their two original albums, too.

"Since I Lost You" was a staple on Wonderful WOXR in the mid-70s. They also pushed Sutherland Brothers and Quiver real hard. those were the days.

Always thought they were great. Got a couple of their cds from their website a few years ago.
Here is a Youtube video of them live "Never say too late" & "Chimes of freedom" : https://youtu.be/Zdv8yVyTfIw