From 1990, and their sort of covers album Fakebook, please enjoy cult favorites Yo La Tengo... 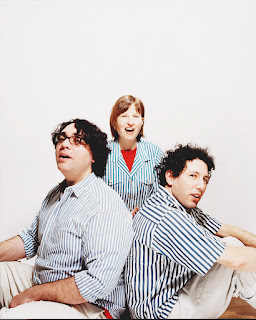 ...and a sprightly remake of that Cat Stevens song -- "Here Comes My Baby" -- we were discussing a few weeks ago.

Ira Kaplan, who's the auteur of this band, was originally a New York rock critic who came up professionally more or less the same time as me; a very good writer and a lovely guy (I can't recall specifically which press junkets we were on together, but I think one was The Who on the Quadrophenia tour).

That said (and I know some people whose opinions I respect absolutely LURVE Yo La Tengo) but at my age I have to be honest -- I've always found them a little bit twee, as the Brits say.

That said, this particular interpretation is really quite nice. There was a killer version of John Cale's "Andalucia" on the album too, if memory serves.
Posted by steve simels at 9:45 AM

I've never heard or seen the album, but I hear there is a version of The Kinks "Oklahoma USA"mon it and I wonder if it's any good.

I have a couple discs by them I was never able to really embrace.

No bad, but not so good either. The Tremolos original & the FloMo's versions are better.

Trems is the meat. Yo La Tengo does not have it. Unless you're craving nothing-burgers. Douchebag band.

It's all a matter of opinion, ultimately, but if you want to hear a track by them that (at least in my judgment) is NOT twee, check out the ragingly beautiful cut "We're An American Band" (not a cover of the Grand Funk song), from their album "I CAN HEAR THE HEART BEATING AS ONE".

This IS a wonderful album of covers. Their take on 'Oklahoma USA' is just as beautiful as the original. The real corker, though, is 'Emulsified,' a great Wooly-Bully-style workout. If you ever find the original by Rex Garvin and the Mighty Cravers, grab it-- it's raw RnB RnR worthy of Screaming' Jay Hawkins.

I bought the Tremeloes single, Here Comes My Baby", at our local Ben Franklin store.
That will probably give you an age guess.
It's not a Todd / Faithful cover so what.
I enjoyed this cover - loved the sound engineering on it.
Listening to it made me think that this is the sound I would hear if they were in my living room.
rob

Found it - Oct 6th post - The Mavericks, same cover TexMex'd.
Steve it would have been an interesting contrast.
rob