I wrote about fabulous singer/songwriter Cait Brennan on the occasion of the release of her debut album back in February.

But until this past Saturday, I hadn't had a chance to meet her. 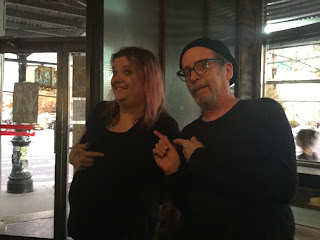 This was at a cool club in Brooklyn called Bar Matchless (they have a great brunch on weekends, which I highly recommend). The occasion was Cait doing a blistering (if too brief) live solo set as part of the most recent International Pop Overthrow Festival.

In any event, she was as delightful in person as I had hoped, and she also did an absolutely killer version of this song from the album.


Basically, a splendid time was had by all.

But next time you're in New York, Cait -- bring a backup band!!!

Next time she's in NYC, you should coordinate with her and do a Cait Brennan and the Floor Models gig! And for fuckssake, get it on tape! <3