Christmas Comes But Once a Year (An Annual Series): Part IV -- Special The Golden Age of Television Edition

From CBS TV -- originally broadcast live in 1956, but here recorded in the studio -- please enjoy Basil Rathbone (what a singer!) and "Mankind Should Be My Business," one of the big numbers from The Stingiest Man in Town.

Which I believe is the first ever musical adaption of Dickens' A Christmas Carol.

I was nine years old when this was first aired, and I remember it made a humongous impression on me. The ghosts were particularly scary, albeit not as much as Rathbone's atonal groaning in the songs. I also had the soundtrack LP, because an uncle of mine worked for Columbia Records at the time, and for some reason I played it obsessively for years. 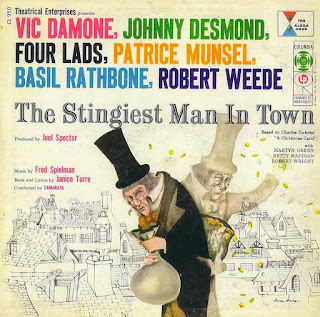 You can actually order a DVD of the original special over at Amazon here.

I should add that the show was remade as a Rankin/Bass animated special in 1978, which is also available at Amazon if you're an insane Walter Matthau completist (he sings the part of Scrooge at least as well as Rathbone, for what it's worth).

And have a wonderful Christmas day, all. Especially you Jews -- enjoy the Chinese food.