Annals of the Land of Ice and Snow: For a Dour, Existentially Depressed People, Those Swedes Sure Are Tacky!

So yes, on our last day in Stockholm, we took in the museum devoted to the country's biggest cultural export since those ubiquitous meatballs. 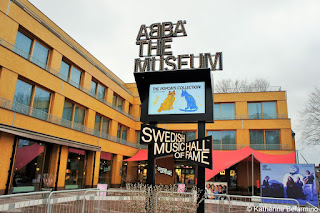 Now, just so we're clear -- I like ABBA. My beloved Floor Models famously (in Greenwich Village) covered their "S.O.S.", and "Knowing Me Knowing You" is a legitimately great song (The Wondermints, to their credit, agree. Bigly.)

That said, the museum is pretty...silly, I think is the word. Basically, it's like a kitsch version of the Rolling Stones Exhibitionism show, but if you like that sort of thing, it's certainly worth a trip. Here are my two favorite exhibits. 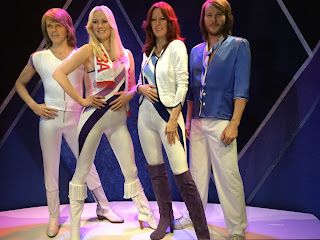 And ABBA -- the puppets. Which are actually quite a little disturbing. 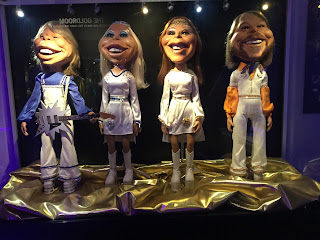 And speaking of a little disturbing, those puppets are the stars of ABBA: The Last Video. Which was playing at the Museum and which, after viewing it, a certain Shady Dame and I fled the building in terror.

It's true -- some things in life once seen can NOT be unseen.

More Swedish-themed mishegass on the morrow.
Posted by steve simels at 9:39 AM

Even with puppets, who can resist Dancing Queen?

Abba Schnabba. Did you go to Pet Sounds?

I can't think of a museum devoted to rock music that wasn't at best a disappointment. The only thing I remember from the RRHoF in Cleveland was Richie Valens' childhood roller skates.

Great video, lots of laughs, putting it on auto-replay. And always a treat to see the late great Rik Mayall in action. Thanks!