Holy cow -- power pop genius and friend of this here blog Richard X. Heyman has a new CD coming out! And he needs your help!!!

If you don't know Richard's work -- either solo (or more recently with his ace band The Doughboys) -- here's an excerpt from the very first thing I wrote about him back in 2007, when both this blog and the world were young. 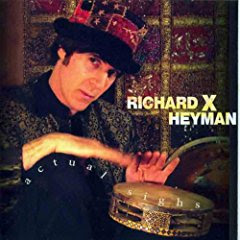 But let's move on. For those who've been as out of touch as yours truly, here's what you need to know. Richard X. Heyman is a singer/songwriter and multi-instrumentalist (one of the best, actually -- he's a killer drummer, unlike most of the breed) who's been making wonderful classicist pop rock (occasionally on major labels) since 1986. The album currently under discussion is in some sense a remake. What happened was that back then Heyman had twenty songs ready to unleash on the waiting world, but after recording six of them he couldn't afford any more studio time and decided to release what he'd finished as a mini-album (or EP, as they used to be called). On "Actual Sighs," ("Actual Size" back in the day) he's re-recorded the original six and finally gotten around to the orphans. As Puterbaugh points out, there's really nothing to compare to it in pop history except for Brian Wilson's revisiting of the Beach Boys' "Smile," except that (for me, anyway) "Actual Sighs" is more consistently terrific...


You can read the rest of the review over HERE. And because I love you all more than food, here's my favorite track from the record -- the spine-tinglingly gorgeous closer "The Gazing Moon."

Meanwhile, here's the KICKSTARTER LINK for the new record.

What are you waiting for, you bastids -- get over there and show the guy some love.

And when you do, tell 'em PowerPop sent you.
Posted by steve simels at 10:11 AM