For those of you who don't recognize the title quote, that's one of the many funny but mean things Sir Raymond Douglas Davies used to say on stage about his younger brother Dave Davies' solo turns..

I bring it up because I got to see Dave sans the other Kinks for the very first time this past Wednesday (here I am with World's Greatest Kinks Fan Frank Lima and the incomparable Dennis Diken of The Smithereens, who was the drummer on the gig)... 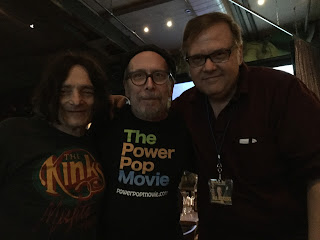 ...and -- be still my beating heart -- Dave opened with this fabulous 1968 gem by his celebrated sibling.

I'd actually forgotten that song (which originally appeared as the B-side of "Days") until the other night, and boy does it kick all sorts of ass.

As for the show itself, it was mostly a lot of fun, although I'd be lying if I said I wasn't disappointed that Dave was performing as a power trio (not to cast aspersions on his guitar stylings, which were splendid throughout the evening; I just would have preferred a crunchy rhythm guitar to flesh out the sound).

That said, to my regret, Dave omitted my all-time favorite song from his catalog -- one I wrote about about on this here blog back in 2009, and which I will repost now for obvious reasons.

From 1965 (and the only-in-America compilation album Kinkdom), please enjoy The Kinks, featuring Dave Davies on lead vocals, and the oh-so-sad-and-beautiful folk-rock ballad "Wait Till the Summer Comes Along." 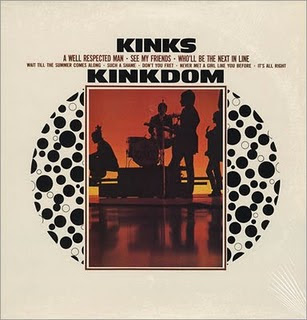 I've adored that song (Dave's first writers credit on a Kinks record, if memory serves) since buying the LP above in a crappy reprocessed stereo version at Sam Goody in Paramus, New Jersey. But I hadn't listened to it in a while, and on revisiting it (and still finding it deeply touching, I hasten to add) I was immediately struck by a) how slapdash the Shel Talmy production is and b) what a wonderfully pretentious Sorrows of Young Werther kid's blues it is.

"I've been crying all the winter," Dave all but sobs in the song's opening line, and the clear implication is that his life has been nothing but endless heartache, self-lacerating guilt and tragedy, and frankly what's the point of going on?

Just to put things in perspective, its popstar composer was all of 17 when he wrote and recorded it.

Have great weekend, everybody!

the Romantics KILL "She's Got Everything" on their tremendous first LP. I heard that before I heard the Kinks' version.

I'd forgotten that as well -- thanks for the tip.

I saw Young And Innocent Days was on Dave's setlist. God, I love that song! And I love the Arthur LP even more.

Great, too, that you got to hang out with Dennis Diken, who, apart from being a fine drummer, is a really nice guy. I met him back about 25 years ago when he walked into the record store I was working in Toronto (he was in town on his honeymoon, believe it or not). I mentioned to him that a friend of mine and I were both big fans of the Smithereens and the next day he came back and gave us these signed postcards that the Smithereens had printed up, with each of their autographs on them. I still have mine. It's funny, too, when I first recognized him, he said that he often got mistaken for another drummer in a "power-pop" band - Bun E. Carlos from CHEAP TRICK.

I've known Dennis and the rest of the Reens since
my days in the Village, long before they got signed. And yes, he's not just a great drummer, but a real prince of a guy.

1) A couple of other things from that meeting with Dennis: he asked me directions to Toronto music landmark The Horseshoe Tavern because rockabilly idol Jack Scott was playing there around that time, and he was also mentioned Chez Piggy, the restaurant in Kingston, Ontario owned by Zal Yanovsky of the Lovin' Spoonful. He was playing to visit it on his way down to Montreal.

Did Dave's stroke (now ten years or more in the past) seem to affect his performance?

Dave's made a great recovery.

Speaking of the Smithereens. I saw them at the House of Blues in Hollywood shortly after the venue opened summer 1994. Dave Davies did a guest shot with them, which was a nice surprise.

Also, in the mid 1990s, there was a Kinks Tribute benefit in Santa Monica. Carla Olson, The Plimsouls, The Wondermints and others were all doing Kinks songs and Dave Davies turned up. This would be early 1995. The first time I saw Dave solo was in 1997 at Luna Park, a small venue in Hollywood. I think it was one of his first solo shows, probably a warm-up. Andrew Sandoval and a couple other local dudes were in the band. He did gigs in Santa Ana and Redondo Beach in the coming week and we went to both and taped.

At Luna Park this guy we knew was videotaping. Some of the stuff is on youtube. My DAT audio is a perfect capture as opposed to the video which is pretty muffled. I had just bought some Schoeps mics a couple of weeks earlier. Luna Park had good food at the time and we ate at the restaurant pre-show. I remember I told the waitress that I wanted The Towering Filets but without the super gay presentation. I wanted to eat the damn food, not look at a frickin' sculpture and disassemble it. If I wanted a meat sculpture I'd erect my own.

Post stroke I saw him a couple of times. The bands were different and he's older. Seems like the stroke hasn't had that much of a lasting effect. I understand why Steve would have preferred more guys in the band, though.

When he played the House of Blues in 1999, he invited us up into the Foundation Room because he remembered us from the 1997 run. He was in good spirits and was super nice to us.

Gary "Not So" Bright [aka Sir Frankie Crisp], a bootlegger was at most of the shows. Big Kink fan.

The Kinks at their garage rockin' best. It's true The Romantics killed on their cover, but like everything in a certain space and time there's nothing like the original. I love the piano which, honestly, is downright tasty.