[Okay, herewith an update of a post from August. Trust me, there are two audio clips at the end that will make it all worthwhile. -- S.S.]

So as long time readers are aware, back in the early 80s I toiled in a 12-string pop band called The Floor Models. And also that Andy Pasternack, one of our principal songwriters (and our Rickenbacker ace), passed away unexpectedly in 2012.

I should add that apart from being immensely talented, Andy was also one of the sweetest guys who ever wore shoe leather; as Gerry Devine (our singer and other principal songwriter) put it to me recently -- Andy never got the memo that if you're a genius you're supposed to be a dick to other people.

In any case, there was a song of Andy's called "You Can't Tell Me Anything" that I particularly loved, and which we used to do live for ages, but for some reason never demoed, which has been a sort of sore point with me for all these years. So recently I decided that we should record it for a possible posthumous EP as a sort of tribute.

Only problem was nobody could remember the lyrics. Ack.

Then a month or so ago I discovered a crude live version, taped by someone with a boom box in front of the band at one of our legendary weekend gigs at The Other End (bless you, Pat Kenny!). We edited it -- removing a duplicate verse and a brief instrumental solo section that didn't really work -- and presto! We had a click track for a concise three minute song that seemed to encapsulate the entire esthetic of the band.

So then ace drummer Glen "Bob" Allen, myself, my old 70s bandmate Tony Forte (on Rickenbacker 12-string), and brilliant guitarist J.D. Goldberg (who came in for Andy in a later incarnation of the band) headed into the studio to recreate the song from the ground up. (Gerry did his vocal at home and then intertubed it to us.)

And here it is in completely finished form..

With all due respect, I think it's fricking gorgeous. 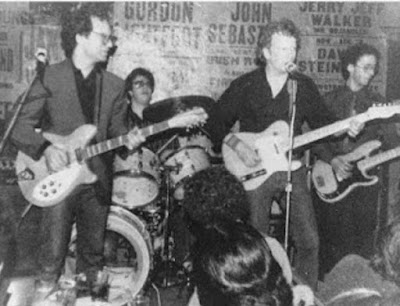 I should add that the EP -- which will be titled (per Andy's concept) 4 X Floor -- will also include a raga-surf instrumental written by Andy and Gerry, a new recording of a recently rediscovered Andy song that is about the most sad and beautiful thing I've ever heard, and a new recording (with strings, yet) of a song that power pop great Mark Johnson wrote for us -- and will hopefully be ready for release early next year.

Although if I've learned anything since I've started working on these projects, it's that it always takes longer than you think.

In case you haven't noticed The Floor Models are a living breathing band again and doing wonderful work.

Now it's time for a new Gerry penned song to be added to this project.

Did you mention before that Mark wrote the song specifically for the band? If so, I don't recall that. (Memory sucks: don't take it personally.)

He told us that at the time. Is it true? Who knows...we were all kids.😀