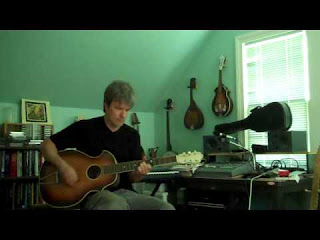 In any case, I lost track of the guy over the years, but I just Wiki'd him, and he's done really well for himself since then, including an Oscar nomination for a song he wrote for the soundtrack of The Horse Whiseperer.

I believe that Owen wrote/co-wrote a bunch of songs that appeared on Toni Price's early-90s album "Swim Away", which is a pretty sensational record in its own right.

What is that guitar??

I've been a fan of Gwil's since that first Toni Price album. Gwil also has great songs on all of her other albums, all of which are worth buying, I don't think she's ever recorded a bad song. Unfortunately, she doesn't play outside Texas, and usually does an early show on Tuesdays at the Continental Club in Austin.

Gwil also has a few songs on the early Bloodshot Records comps.