The greatest orchestral arranger in rock history -- hands down -- has passed. 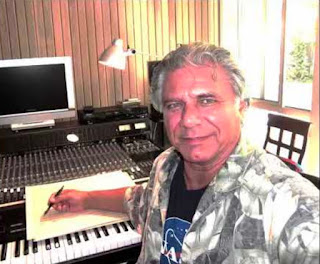 Buckmaster is best known for his collaborations with Elton John, and with David Bowie on "Space Oddity," but he also worked with just about anybody who was anybody in pop music, from Taylor Swift to country (Dwight Yoakam) and jazz greats (Miles Davis).

Here's what I think is his masterpiece, however. The transcendently beautiful string arrangement at the end of The Rolling Stones' "Moonlight Mile."

I get chills just thinking about that, to this day. For me, anyway, it's always suggested what Ralph Vaughan Williams might have come up with if he'd ever collaborated with a British rock band.

His arrangement on Elton John's "The Ballad of Danny Bailey" has always blown me away.

Enough of this death shit.

Blue Ash Fan,
I agree wholeheartedly about "...Danny Bailey". In particular, the last couple of minutes of that track are just great, one of my favorite pieces of orchestral pop EVER. I imagine he was also responsible for the arrangement on "I've Seen That Movie, Too", from the same album (GOODBYE YELLOW BRICK ROAD).

no no no, his best work was on UFO's "The Wild, the Willing, the Innocent."

Are we sure about his involvement in "Goodbye Yellow...". Del Newman is listed as composer arranger on All Music. I don't have my triple foldout LP to confirm. Either way, I agree that "I've Seen That Movie Too" is fantastic.

Well, damn, Ken, don't I have egg on my face? You're right: it was Del Newman.

Which detracts neither from the greatness of "Danny Bailey" nor the brilliance of Buckmaster.

We regret the error.

No egg tossed. Love "Harmony" off GYBR also. Chords progressions at the end are a perfect way to end a perfect album.

Damn. Just finally picked up the Elton John SACD catalog a couple weeks ago and listening last week I was thinking that without Buckmaster, Elton might not have hit it big - his imprint is all over the early albums.

"Moonlight Mile" is so gorgeous that just thinking about it makes my hair stand on end.

his orchestration near the end of Carly's "Haven't Got Time For the Pain" is another example of his brilliance.

The orchestral arrangement absolutely catapults Madman Across The Water into a kind of urgent grandeur that is epic like.