Actually, something even rarer, that I frankly didn't even know still existed.

An indie record store. In Canadia -- home of Rush, Gino Vanelli and Ed the Sock -- no less. 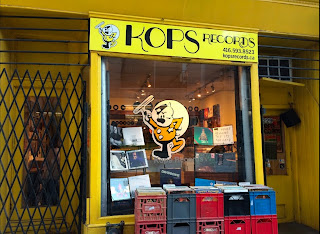 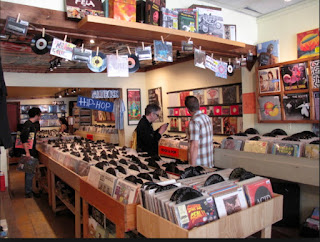 Long time readers may recall that back in 2011, I posted something about a similar emporium in Hackensack, N.J., my then home town.

Which, BTW, I am happy to report is still there. By which I mean the store AND the town.

In any event, KOPS RECORDS stalwart Chris Edwards, who has been following my poor scribblings since the STEREO REVIEW days, has been hipping me of late to some interesting music that I have, in turn, passed along to everbody else who hangs here. And to express my gratitude, I recently sent him some CDs by the fabulous Floor Models.

Which occasioned the literary effort by Chris below. Please enjoy.

The setting: A radio studio at Abbey Road.

JOHN LENNON: ... yes, and the really special thing about these Floor Models CDs is that they're actually SEALED.

PAUL McCARTNEY: Yeah, I mean normally when I think of a floor model, I think of something sort of open & accessible, you know, something that people can test out and kind of... get a feel for. It IS very unusual to find a floor model that's SHRINK-WRAPPED.

LENNON (aside): Well, I've rapped a lot to my shrink over the last few years, as you know.

McCARTNEY (deadpanning): Excuse me, John. This segment IS actually about the Floor Models, not Primal Scream.

LENNON: Yes, you're quite right.

McCARTNEY: Well, one thing I'd like to say. I haven't heard this band's music yet, but I already feel a bit of empathy for them. I mean, they titled one of their songs "Letter From Liverpool", after our home town.

LENNON: I noticed that, too. (Deadpanning) Yes, we've got a "Letter From Liverpool", a package from New Jersey and an e-mail from Canada. I'm not sure how all this happened but I think somebody should have taken that left turn at Albuquerque.

LENNON (continuing): Well, our producer's just told me that they've taken the shrink-wrap OFF one of the Floor Models and now we can actually hear the song Paul just mentioned. So let's all give a listen to the Floor Models, "Letter From Liverpool", through the miracle of radio waves.

I should add that after the Senate passed that America-killing tax bill on Friday, a certain Shady Dame and I decided to move to Canada on the condition that Chris adopt us. So far, he's still thinking about it.

Thanks for giving me, and the store I work in, a nice shout-out. Music retail (specifically of vinyl) in PHYSICAL stores is still very much alive and deserves to be, and music (in all its wonderful variety) is still very good for the soul. And your reviews and posts have turned me on to some great stuff over the years, so everybody wins.