Somewhere in Hell, Lee Atwater is Laughing His Ass Off

Attentive readers may recall that last March I purchased a Danelectro 12-string guitar... 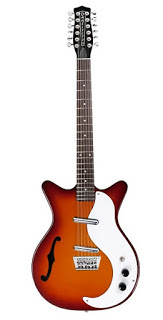 ...that cost a third of what a Rickenbacker goes for and turns out to be a lot easier to play. I've been in the studio of late with the Floor Models and our ace guitarist J.D. Goldberg used it to put down a McGuinn-esque track on the new song we're working on that has blown my tiny mind; as soon as we're finished, I will of course share it with you guys.

But in the meantime, I am so depressed and angry over the stupidity of the Democratic Party in allowing the Acorning of Al Franken that I am almost beside myself.

So here is a new song by my garage band chums The Weasels, featuring the aforementioned Danelectro...

...that has given me a little comfort.

I'm playing the first half of the solo (up to when the harmonica comes in); the other credits include the song's composer Glenn Leeds on vocals, drum programming and the rest of the 12-string stuff, and Alan Weissman on bass.

Oh, and in the meantime fuck you Chuck Schumer and Kirsten Gillbrand. By which I mean with a rusty chainsaw.
Posted by steve simels at 9:41 AM

It is to vomit, Steve.

I think you might enjoy this Lithwick piece about the Dems and their tendency toward unilateral disarmament here.

Co-conspirators, unindicted or otherwise, yes. I don't hear anger in the song. I hear missed opportunities. And I agree with you about Franken, though for the life of me, I can't think of a way out for Dems, and it ain't Schumer who's leading the pack, it's Kristen. no, Karsten, no ... KIRSTEN Gillibrand on the lead with this one. But back to the song. Nice, and nice guitar sound too. Maybe bring in the vocal chorus earlier, but that's me. Srangely, it reminds me of any one of a number of Scott McCaughey's Minus 5 and Young Fresh Fellows songs, and as you may have read, McCaughey suffered a major stroke mid-late November, and fans, like me, contributed more than 100K to his medical bills via a GoFundMe campaign (see https://www.gofundme.com/c3npfr-scott-mccaughey-medical-fund). McCaughey's one of my musical gods, and has been so since I was introduced to him via his Young Fresh Fellows.

The song won't play in my browser.

Very nice, well done, as jangly as it gets. The Danelectro sounds terrific. Way to go Stevereno!

Love the song. As someone once said, and I paraphrase, there is no better sound in music than an electric 12-string guitar.

Mark -- no, I hadn't heard about McCaughey's medical woes. Good on everybody who contributed to his medical fund.

Yeah, maybe the Democrats and the rest of the politicians in Washington would like to address themselves to this question: how a person like Scott McCaughey can have a MAJOR MEDICAL CALAMITY, probably NOT HAVE OR NOT HAVE BEEN ABLE TO GET PROPER MEDICAL INSURANCE, may not be able TO GENERATE INCOME for himself and his loved ones for a while because of SAID CALAMITY, probably be REQUIRED to PAY A DRAINING, HUMONGOUS W-T-F BILL OUT HIS OWN POCKET and need a friggin' GO FUND ME campaign to show him the COMPASSION & DECENCY that the SYSTEM and his COUNTRY should have ???!!! Mr. Schumer, Ms. Kristen, Mr. Trump ???

That sounds better than anything I've heard in a while.

Agree to all, and Bravo Stevo!

The Democrats should have come out and said, yes, Al Franken will resign--the day after Trump does! Go ahead, Republicans, tell us what the rule is, and we'll follow it.

To be REALLY fair, we should insist that Clarence Thomas step down, too, but baby steps. The Republican Party is pure evil at this point.

Somehow I've managed to approach 60 without ever being in a photo squeezing a woman's breast but, then I'm not a satirist or a comedian...or a senator. They threw him under the bus and that lady in the photo jump started it and that's all I'm gonna say. The important part here is the song and it's an excellent slice of 12-string goodness. Really excellent lyrics that in direct and simple terms define a generation's dream before JFK's demise began a hijacking of the dream and the voice of the not just the young but the average person. The song is upbeat enough that I'm actually tapping my toe and happy while being pissed. If a song can say and do all of this it's actually great!