Weekend Listomania: Special It's Nice Out -- Might as Well Leave It Out! Edition

[I originally posted this one back in -- gasp! -- 2009, when both the world and this blog were young. But for obvious reasons, or perhaps reasons that shall become obvious, I thought it was newly relevant to our national discourse. I have, of course, rewritten some of it, and swapped out some of the songs, just to prove that I'm not the total slacker that so many of you, with justification, suspect I am. In any case, enjoy. -- S.S.]

Okay, gang -- here's a fun project for us all to contemplate in the wake of this week's nor'easter on the Right Coast:

Self-explanatory, I think, so no arbitrary rules this time.

Okay, here's my totally top of my head Top Seven:

7. Terry Anderson -- Weather or Not 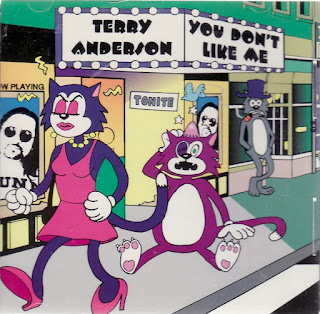 If truth be told, the entire original version of this Listomania proceeded from the fact that I had wanted to post this song -- to my mind, the absolute best Rolling Stones/Keith Richards-style guitar rocker that the Stones or Keith never did -- for what seemed like ages. (Catchiest goddamn chorus in the world, n'est-ce pas?). In case you're wondering, Anderson comes out of the Georgia Satellites axis (he co-wrote that group's semi-hit "Battleship Chains") and this derives from the early 90s solo album seen above. I should add that said album is still available over at Amazon, and you should hie there toot sweet and snag a copy.

Depending on my mood, either this or "And Your Bird Can Sing" is my favorite of the bunch of guitar-driven, vaguely metallic pop gems that the Beatles recorded around this time in late 65-early 66. This one has Ringo's most inventive drum performance, of course.

A recent track by my old high school garage band. I'm doing most of the guitar stuff, including the solo, but it's written and sung by our multi-instrumentalist secret weapon Glenn Leeds. In any case, I love it. "It may be freezin' but I don't feel cold...it's a beautiful day."

4. Lou Christie -- Rhapsody in the Rain

The followup to the equally apt "Lightning Strikes," this one got banned by most 1966 radio stations; I wonder why.

"The only reason no one likes her music is because she's a woman and an Oriental" -- John Lennon to Jann Wenner, 1971

Probably the oldest song ever featured on a Weekend Listomania, i.e., this probably dates back to Shakespeare's day. BTW; the word goddess is overused in some circles, but I think Maddy Prior's vocal on this qualifies her for consideration as one.

And the number one ill wind that blows nobody good song, it's so ridiculously apt given what's going to be broadcast on 60 Minutes this Sunday that I can't believe we're even having a discussion, obviously is ---

Who knew somebody had written a hit tune about her decades ago? Amazing.

I just sent the link to Terry Anderson. He'll get a kick out of it.

Every artist on the list, except DEEP STATE DARLINGS the Beatles, snubbed by the so-called Rock n roll Hall of Fame. Crooked elite in Cleveland can’t handle the FACT that the Weasels are the most listened to band in the world! SAD!

The ones that jumped to mind immediately:

"Ballet for a Rainy Day" by XTC

and rain walking (or not) themed songs:

"Walking In the Rain" by the Ronettes (or Jay & The Americans, or the Walker Brothers) -- man, that's a great tune no matter who does it...

"Walkin' In The Rain With the One I Love" -- Love Unlimited (which I have to think "Kung-Fu Christmas" was taken directly from now that I think about it...)

"You Don't Have to Walk In The Rain" -- The Turtles

You asked for it: (Rain first)

Feels Like Rain by John Hiatt is in my list of top-tier songs and is also something of a right of passage for slide guitar players.

Sonny Landreth played the slide solo on Hiatt's original. Ry Cooder played it on Aaron Neville's version which is, of course, also gorgeously sung. And Buddy Guy's version features Bonny Raitt with her long, sustained Strat tones. Think you've got slide chops? This is the song for you.

John Hiatt, Feels Like Rain - Hiatt is an American treasure. Unfortunately I missed the recent tour where he played the whole album (and had slide magician Sonny Landreth back in the band) but I heard it was marvelous; they played here at a 300-seat venue and it sold out in a flash.

And another Whitley song, Dust Radio, from his first album “Living With the Law” - yeah, I’m stretching it a bit, but gotta give a shout-out to “my secret Jesus / and the good red road”

A Nazz doubleheader - Under the Ice and Rain Rider, both from their second album “Nazz Nazz”, which apparently is not in print ANYWHERE in either physical or digital form - what a travesty! Drummer Thom Mooney sounds like he O.D.’ed on a combination of Keith Moon and Mitch Mitchell before recording these two songs, both of which are fantastic.

The Eagles, Hotel California - “cool wind in my hair” - I’m not an Eagles fan (I am a Joe Walsh fan though), but I do like this song a lot; it is extremely well put together, played, and produced, and I think it holds up. And I definitely have a soft spot for Big Daddy’s sendup done in spot-on Del Shannon style.

Sun (too numerous, but here's some good one)L

How could I forget "The Rain, The Park and Other Things?"

"How could I forget "The Rain, The Park and Other Things?""

I think favorite Ringo performances might be a good Listomania in the future. "Rain" its usually cited as his best and even Sir Ringo himself has called it his favorite but it never moved me nearly as much as the solid rock grooves on things like "Drive My Car," "The Word," or "Ticket to Ride."

"Sir Ringo" - sounds like a new kind of hot sauce.

Then there's the other "Stormy" by garage teens the Jesters of Newport. Covered by the mighty Lyres who take it for a nice spin, as usual. Link won't work, (not Mr. Wray), investigate and google away!!!!!

I believe it was included n the first go-round of this column but how can we leave out The Kinks "Rainy Day in June".

PS: I love John Lennon but he was a moron when it can to his opinion of his wife's musical abilities except "Walking on Thin Ice" which was great.

It may take the human race many years until we catch up with her musical genius. Many years.....

Graham Parker - "If it Ever Stops Rainin'" from his brilliant Deepcut to Nowhere lp. But the live version on 103 in June, Live in Chicago is one of my favorites.

Wreck of the Edmund Fitzgerald

forgive if above I didn't see it; Riders on the Storm The Doors