Cinema News From All Over: An Occasional Series

The short version: In 1965, Tony Janelli -- an old college friend of mine -- saw one of the first ever Velvet Underground gigs, which happened to be at his high school in suburban New Jersey. An experience which blew the minds of the youthful attendees and, in Tony's case, changed his life.

So he and some of his filmmaker friends have now made an animated short celebrating the VU's performance. And as you'll see from the brief trailer below, it's pretty fricking amazing. 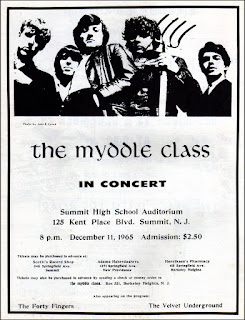 I should add that the show's headliners -- The Myddle Class -- featured the future husband of Carole King and the singer of Steely Dan; they also had a minor regional hit that the Blues Project appropriated to better effect as "Wake Me, Shake Me." The other act on the historic bill -- The Forty Fingers -- has, alas, disappeared into the mists of history.

In any case, the film is about to hit the festival circuit; I'll keep you posted on further news about the project as it develops.

Re: The Myddle Class. So would the future husband of Carole King be Charles Larkey? And the singer of Steely Dan is David Palmer? Palmer sang on the Dan's first album (he's the lead vocalist on "Dirty Work" and "Brooklyn Owes...") but then left the group.

Yep to both questions.

If the film is as good as the trailer, it'll be worth watching. And maybe it'll shake up the Brian Eno line about how the Velvets didn't sell many copies of their first album, but each buyer went out and started a rock band. In this case, someone went out to be a filmmaker.

That being said, we probably all would've been served better if each person who bought the first VU album went out opened up a same-day Martininzing dry cleaner.