With due respect to fans of Xanadu, Thank God It's Friday, and Staying Alive (the Bee Gees replaced by Frank Stallone? Genius!) I think most sentient mammals are in agreement:

Hands down, it's the 1973 singing and dancing remake of Lost Horizon. 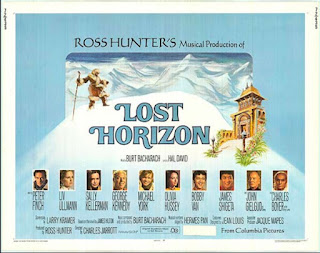 Written by Larry Kramer (yes, him). And starring Peter Finch, Liv Ullman, Sally Kellerman, Bobby Van, Sir John Gielgud with his eyes taped back to make him look like your six year cousin pretending to be Chinese, Charles Boyer in a diaper, and a chorus of Buddhist monks in little orange Mark Spitz bathing suits.

Here's one of the big production numbers, featuring a song that helped break up the previously unassailable team of Burt Bacharach and Hal David.

True story: Back when I was a baby rock critic, I was invited to an industry pre-premiere screening of LH (Thursday, March 15, 1973 -- a day that will live in infamy) at (if memory serves) the majestic Ziegfeld Theater. It was for charity, as I recall, and most of the audience was a good thirty or forty years older than I was at the time and much better dressed; I'm pretty sure it was in fact a black-tie event, which means that I stood out along the lines of Raymond Chandler's famous tarantuala on the angelfood cake. In any case, I spent most of the first forty minutes of the film desperately trying not to laugh, for fear of having the wrath of the assembled movers and shakers descend on my punk ass, and by trying not to laugh I mean literally biting my hand to the point of drawing blood. You can imagine my relief, then, when during the above musical number, I finally started to hear nervous titters emerging from other quarters of the audience, which were then followed by an absolute tsunami of helpless guffawing from the crowd at large.

Trivia note: In the film, the library at Shangri-La is supposed to be a repository for the world's great literature. If you look closely, there are a number of Readers Digest Condensed Books on its shelves.

Postscript: The last time I wrote about LH, back in 2008, when I was toiling at the website of Box Office magazine, the film itself was unavailable on home video. Since then, it has, however unadvisedly, been released in restored form on DVD, and can be ordered over at Amazon HERE if you are so inclined. The Bacharach/David soundtrack can be found on CD HERE, although, obviously, it is recommended only to the most perverse of ears.

Ok, invoke it's name one more time Hell will open up and consume you.

That said, it was really a crappy era for musicals, wasn't it? Paint Your Wagon, Finian's Rainbow, Dr Doolittle. The Horror, the horror.

These choices are divisive, because many people love them:
Brian DePalma's 'Phantom of the Paradise'
Baz Lurhmann's 'Moulin Rouge' (actually Baz Luhrmann anything)

The there's 'Can't Stop the Music' (never seen it, but its rep is abysmal)
and one of the rock-bottom worst films ever: 'Shock Treatment' (the Rocky Horror sequel)

Life is too short.

Yes, "Lost Horizon" was horrible, but entertaining in its earnestness gone wrong. If a movie is bad enough to make you laugh, it' can't be the worse. My nomination is "Can Heironymus Merkin Ever Forget Mercy Humppe and Find True Happiness?" Anthony Newley is insufferable in this ode to Newley's ego. I'll take Liv Ullman, Peter Finch, and Olivia Hussey. You can have George Jessel, Milton Berle, and Joan Collins.

I seem to recall seeing The Fifth Dimension performing "The World Is a Circle" on television back then. That doesn't mean that it was nominated for an Academy Award for best song, I hope?