Your Wednesday Moment of Words Fail Me: Special Words REALLY Fail Me Edition

So I'm about to depart for a European vacation -- part of which will involve a Beatles tour in Liverpool (yay)! -- but while I'm getting ready for it, I thought I needed to pass this news along to you.

The Short Version: As I'm sure everybody who has ever read my poor scribblings at this here blog is aware, the legendary Yardbirds -- then featuring Jimmy Page on guitar -- did a concert at the Anderson Theater in NYC on March 23, 1968. Although the venue only sat two or three thousand people, since then approximately 50,000 liars -- most of them guitarists -- have claimed to have been in attendance at said show.

Unlike most of those 50,000, however, I was actually there. As was a certain Shady Dame of my acquaintance, although we did not know each other at the time. We have since bonded over our mutual attendance at said concert, but let's move on.

Anyway, a horrific live LP of said show -- with miserably mixed sound plus horrible fake echo and overdubbed bullshit applause -- was released in 1971 on Epic Records. 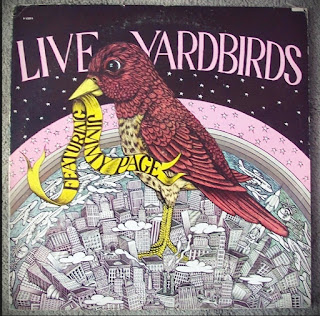 To his credit, Jimmy Page instantly threatened CBS/Sony with legal action over the release of said horrible album, and it was immediately pulled from circulation. At which point, it became a highly regarded, but always disappointing collectors item.

In the years between then and now, countless unofficial and/or semi-official/vaguely legal re-issues, on both vinyl and CD, of the album have been offered to the gullible public, including me. I myself have probably bought every single one of them on the off chance that the sound even remotely resembled my memory of the show, and every single one of them has sucked. Big time.

Cutting to the chase: Last week, I was web-surfing and discovered that Jimmy Page himself had re-mixed the original tapes and released them (along with a second disc of Yardbirds studio rarities) on his own label as Yardbirds 68. 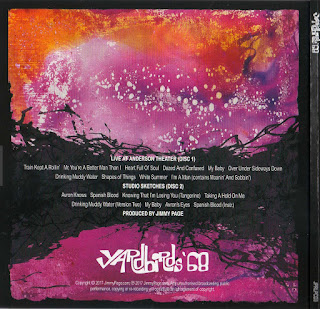 And I figured -- okay, I'll give it one more shot.

And guess what -- THIS is the fucking shit.

Ladies and germs, from said reissue, I give you the opening track "Train Kept A Rollin'."

Behold it in breathless wonder.

Let's just say that rest of the record is perhaps even more mind-boggling, including a version of "White Summer" that will make the hair on the back of your neck jump up and do the Macarena.

You can (and should) buy the whole thing OVER HERE.

Meanwhile, wish us Bon Voyage and we'll talk to you, albeit perhaps briefly, on Thursday and Friday when we're a little more organized.
Posted by steve simels at 8:51 AM

Yes, a truly great remix of a truly great album, even with the original added applause. I was just 17 at the time - do you know what I mean? - of the concert, and desperately wanted to go see The Yardbirds at the Anderson, but could not convince any of my friends to see the show. Instead, two friends wanted to go to the newly opened Fillmore East on that fateful March 30 to see headliner Richie Havens. I agreed to go because the opening act was my much-beloved United States of America, to this day, the loudest band I ever saw. Between Havens and the USA was The Troggs, who were dreadful. I can't even remember whether Reg Presley was still in the band at that time. Havens was great, but still, I kept thinking that I'm missing The Yardbirds with their new guitarist, Jimmy Page.

And I still own the Epic Records version of Live Yardbirds. As well as the recent Page remix of the album.

"White Summer" is really "She Moved Through The Fair" as arranged by Davey Graham. One of Jimmy's most egregious borrowings. Here is Davey in 1962.

I always wonder how much greater the band would have been with a decent singer.

First heard the album at age 16 on a Memphis underground station. Looked for it for years in every cutout bin, used record store, yard sale, etc. All to no avail. It came out in 77 again and I got a copy from the local record store as a $1.99 cutout. In about 2 weeks of the album coming out, Page threatened a lawsuit and the record disappeared again. My most prized record to this day.

I always wonder how much greater the band would have been had Jeff Beck remained in the band.

Are you sure she was REALLY there?