From 2009, and their album Warpaint Live, please enjoy The Black Crowes and their pretty darn terrific version of Moby Grape's 1967 ode to the young girls in Haight-Ashbury "Hey Grandma."

Honesty compels me to admit that I had no idea the Crowes' cover existed until the other day. It's not as transplendent as the original, but it's awfully close both musically and attitudinally.

I should add that said song is the opening track on the Grape's first LP, which is the most exciting debut album by an American rock band ever. But we'll have more to say on that subject as the week progresses.

I should also add that the reason I'm on a Grape kick of late is because I just got turned on to What's Big and Purple and Lives in the Ocean: The Moby Grape Story by Cam Cobb... 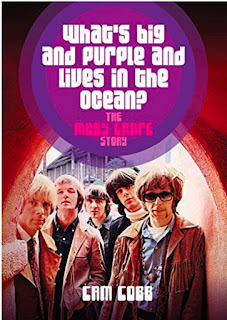 ...the just released biography the band has always deserved, and which can -- and should -- be ordered over at Amazon HERE.

More on that as the week progresses as well.

Here is compilation I put together:

I think that could be Luther Dickinson of NMA on lead guitar. I'm too lazy to do the research, so does anybody know for sure?

1) This is the song I sang with Jerry Miller a couple years ago, the closest to rock and rock greatness I may ever get.

That's probably the element most lacking in this pretty cool cover version.